NBA league officials are making a concerted effort to downplay the inevitability of expansion after Commissioner Adam Silver talked more seriously about the possibility of adding two new NBA teams, most likely in Seattle and Las Vegas. 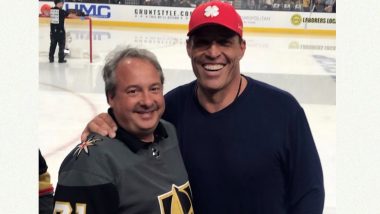 NBA league officials are making a concerted effort to downplay the inevitability of expansion after Commissioner Adam Silver talked more seriously about the possibility of adding two new NBA teams, most likely in Seattle and Las Vegas.

Nobody is buying the NBA’s downplaying of the league’s expansion prospects, though.

It’s widely believed the NBA will expand for the first time since rounding out to 30 teams in 2004 partly to recoup losses from the pandemic.

Las Vegas’s Jay Bloom is leading an ownership group that is now reported to have completed circling the funds to purchase the NBA’s Las Vegas expansion franchise under consideration, putting his group as the favorite to come up with the new NBA team in Las Vegas.

When reached for comment, Jay Bloom said, “While it is most certainly too preliminary to comment on our group’s efforts, Bill Foley’s extraordinary success with the Vegas Golden Knights, together with Mark Davis’s Las Vegas Raiders’ incredibly warm reception by the community and his exceptional world class facilities, and further, the addition of the WNBA’s Las Vegas Aces, clearly demonstrate that Las Vegas is already a major player in the world of professional sports.”

Jay continued, “Be it ultimately our group or someone else, Las Vegas is clearly the most deserving city in the nation for an NBA expansion franchise team.”

Jay Bloom also has the political relationships with the State Legislature, County Commissioners, and Governor’s mansion to make this happen, especially given that no public funds are expected to be needed for the project, as it will be entirely privately funded.

The Bloom-led ownership group is understood to be ready to go and is only waiting for the NBA to finalize its decision on expansion before formally throwing its hat into the ring.

Expansion is not a certainty, but right now most people are discussing “when” and not “if” it is going to happen, and Mr. Bloom’s group is looking like they are favorites to be there to come up with the ball when the NBA is ready.