The India series was only the second Test series Australia were post the post tampering scandal that rocked the country’s reputation and led to Steve Smith, David Warner receiving a year-ban from cricket. Finch said that the team was going through a transition and a lot of the players were finding their feet international cricket at that time. 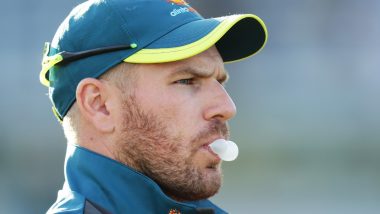 Australia limited-overs captain Aaron Finch dismissed Michael Clarke’s remarks that Australian cricketers ‘sucked up’ to Virat Kohli and other Indian players to save their IPL contracts. Clarke’s comments on the home side ‘being nice’ towards their Indian counterparts during the 2018-19 home series has drawn a lot of flak from other Aussie stars and Finch was the latest to disapprove those comments. The 33-year-old instead said that the series was played in the ‘right spirit’ at a time when Australian cricket was coming out of a storm. Dean Jones Rubbishes Michael Clarke’s Remarks of Australia Not Sledging Virat Kohli to Save IPL Contracts, Says ‘You Don’t Upset the Bear’.

”They were obviously not being nice to impress because they wanted an IPL contract,” Finch told Sports Tak denying Clarke’s comments. “There is nothing about it. If you ask anyone playing on the field they will tell you that it was very very tough. It was played in the right spirit but it was very tough. Not sure where it was coming from.” India vs Australia 2020-21 Schedule, Free PDF Download: Get Fixtures and Venue Details of IND vs AUS T20I, Test and ODI Series.

The India series was only the second Test series Australia were post the post tampering scandal that rocked the country’s reputation and led to Steve Smith, David Warner receiving a year-ban from cricket. Finch said that the team was going through a transition and adapting to a new culture in the team. A lot of the players were also trying to find their feet international cricket at that time.

“The team was going through a transition, and there were a lot of players trying to find their way in international cricket and doing that against India,” said the opening batsman. “Talking as a batsman, Jasprit Bumrah, Mohammad Shami, Ishant Sharma, Umesh Yadav, Ravindra Jadeja and Ravichandran Ashwin, you can’t hide against that kind of attack.

“Michael said we were being nice, but people were just trying to find their own game, they were trying their best way to play Test cricket. But everyone is entitled to their views; he might have seen something from the outside which we didn’t see from inside,” Finch added.

Australia eventually went on to lose the Test series 1-2 with India recording history by their first-ever Test series win on Aussie soil. Months after that series, Clarke triggered a controversy when he claimed that the Australian players did not sledge Virat Kohli and other members of the Indian team because they were supposed to play the same players in the IPL four months later and wanted to save their IPL contracts.

“Everybody knows how powerful India are in regards to the financial part of the game, internationally or domestically with the IPL. I feel that Australian cricket, and probably every other team over a little period, went the opposite and actually sucked up to India,” Clarke has told Big Sports Breakfast. “They were too scared to sledge Kohli or the other Indian players because they had to play with them in April.”

His comments have since been dismissed by Australia Test captain – and captain in that series – Tim Paine, his deputy Pat Cummins and former Australia batsman Dean Jones. Former Indian star VVS Laxman also slammed Clarke for his comments.

(The above story first appeared on LatestLY on Jun 05, 2020 07:32 PM IST. For more news and updates on politics, world, sports, entertainment and lifestyle, log on to our website latestly.com).