Australia white-ball captain Aaron Finch's wife Amy revealed she and her husband have been targeted with threats of violence and sexual assault over Finch's poor run of form with the bat and his captaincy. Finch has struggled to hit form recently and endured a poor Big Bash League and also disappointed against New Zealand in the T20Is. 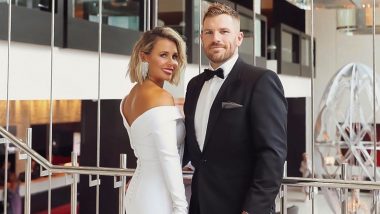 Australia limited-overs captain Aaron Finch’s wife Amy slammed trolls for threatening her with violence and sexual assault sparked by her husband’s poor form in the ongoing Australia vs New Zealand T2OI series. Finch, who also endured a poor Big Bash League season, has managed scores of 1 and 12 in the opening two T20Is of the five-match series both of which Australia have lost. He scored 12 from 14 deliveries in the second game as Australia went to lose the match by four runs. Trolls have targetted the cricketer's wife Amy and threatened her on social media over the Australian captain's bad run. England Men’s and Women’s Cricketers Involved in Ugly Spat on Twitter After 10-Wicket Defeat to India in Day-Night Test.

The cricketer’s wife has endured enough and decided to call out the trolls. She shared screenshots of a comment left on one of her Instagram posts which took aim at her and Finch. “Tell your husband to step up his captaincy bloody loser f**king a**hole b*tch because of him I lost all my money,” the comment read. Gautam Gambhir on Ties with Pakistan, Says 'Cricket a Very Small Thing and Life of Our Soldiers More Important'.

Amy Finch Calls Out Trolls After Threats of Sexual Assault 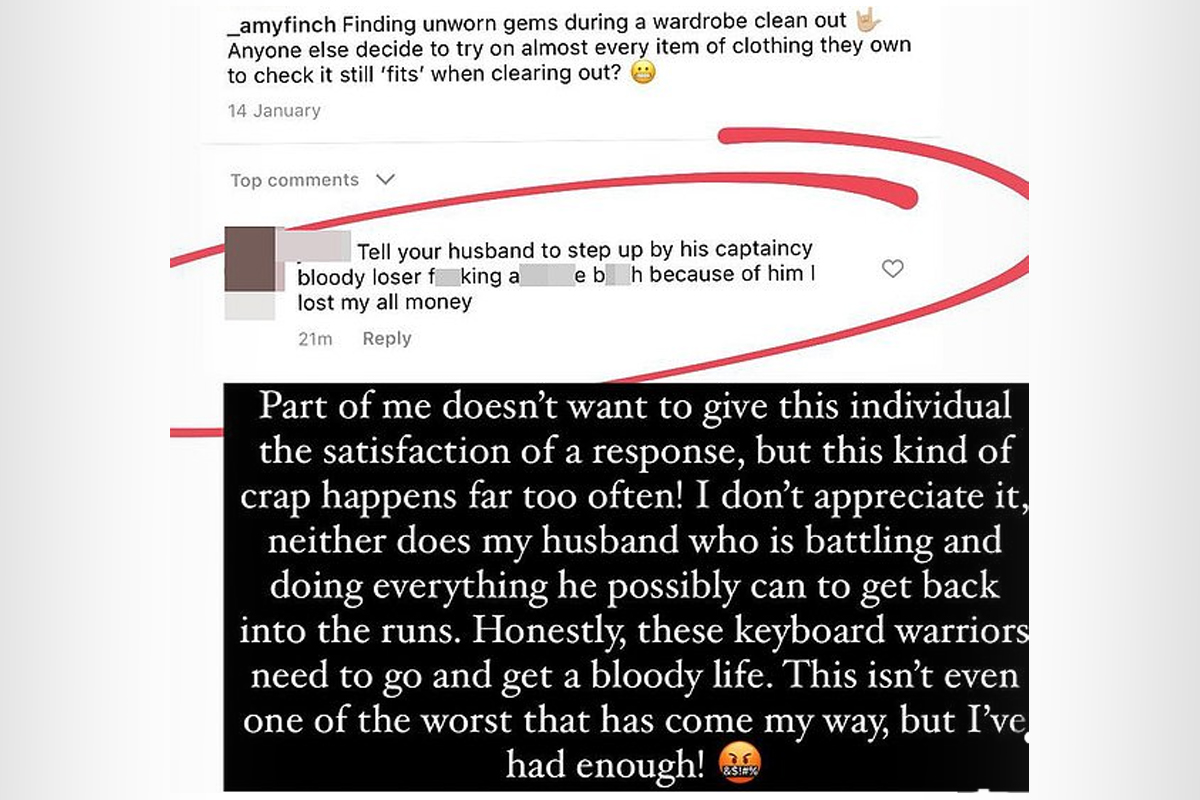 She replied back to all the trolls with a lengthy post wherein Amy mentioned how she keeps receiving these type of comments ‘far too often’. “Part of me doesn't want to give this individual the satisfaction of a response,' Ms Finch wrote. “I don't appreciate it, neither does my husband who is battling and doing everything he possibly can to get back into the runs.”

Amy continued: “Honestly, these keyboard warriors need to go get a bloody life. This isn't even one of the worst that has come my way but I've had enough!” She also explained that for years She, her husband and their family members have been receiving these type of disgusting messages but turned back on them. She decided to speak out after the threats turned violent.

“I have a pretty thick skin and can generally ignore them but recently there have been direct threats of violence and sexual assault,' she wrote. “You name it, I've heard it. It's gotten to a point where it needs to be called out because ignoring it doesn't stop these people. NOBODY deserves that sort of language to be directed at them!” Amy added.

Nobody Deserves That Sort of Language to Be Directed At Them 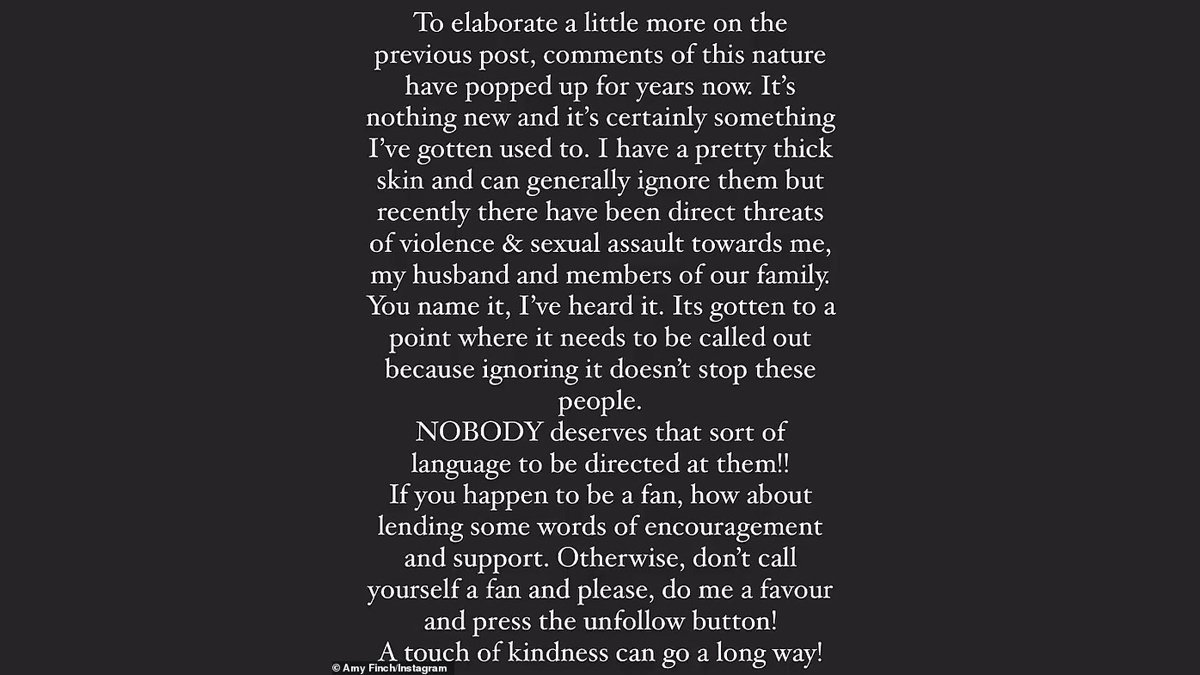 “If you happen to be a fan, how about lending some words of encouragement and support. Otherwise, don't call yourself a fan and please, do me a favour and press the unfollow button! A touch of kindness can go a long way!”

Finch also went unsold at the IPL 2021 player auction after finding no bidders following a disappointing tournament in the previous edition of the IPL with Royal Challengers Bangalore (RCB) where he scored only 268 runs in 12 matches.

(The above story first appeared on LatestLY on Feb 26, 2021 11:28 PM IST. For more news and updates on politics, world, sports, entertainment and lifestyle, log on to our website latestly.com).