Ajinkya Rahane recently walked down the memory lane and revisited some old memories with his family and friends through pictures on his phone amid the nationwide lockdown. With the nation in lockdown, Rahane has been perhaps missing his loved ones and decided to revisit old memories by taking a look at his gallery archives. 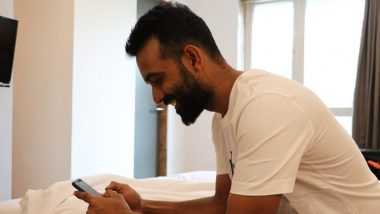 With sporting events across the globe either suspended or cancelled due to the coronavirus pandemic, sports personalities have taken to social media to pass their time and keep themselves busy. Many have also started doing live Instagram sessions with fellow members from the sports fraternity to engage with the fans and entertain them. India Test vice-captain Ajinkya Rahane too have been keeping his fans updated about his daily whereabouts with regular updates on social media. Recently, Rahane uploaded a picture of himself passing his time by walking down the memory lane and revisiting some old pictures with his family and friends. Jasprit Bumrah Shares Video of His ‘Batting Heroics’ During Gujarat vs Goa 2017 Vijay Hazare Trophy Match After Yuvraj Singh Mocked Pacer’s Batting Skills.

“Revisiting some good old memories with family and friends through photos,” Rahane captioned a picture of himself. In the picture, the 31-year-old can be seen using his phone as he sits on a bed. The right-handed batsman was perhaps scrolling through some old pictures on his mobile and revisiting memories with his loved one. Chris Gayle Blasts Ramnaresh Sarwan, Says ‘You Are a Snake and Worse Than Coronavirus’ (Watch Video).

Revisiting some good old memories with family and friends through photos.

Who’s the one with whom you have your best photos and memories? pic.twitter.com/bqCYAVE4Xj

Rahane is currently in self-isolation with his family in Mumbai and was perhaps missing his loved ones and friends. He also asked his fans about their opinions “Who’s the one with whom you have your best photos and memories?”

Meanwhile, the Indian Test vice-captain was last seen in action during India’s tour of New Zealand. Rahane played in all the three Test matches and although India were clean-swept 3-0 in the Test series, Rahane stood out as one of India’s better batsman in the series. Under normal circumstances, Rahane would have been playing for the Delhi Capitals in IPL 2020 but the franchise T20 tournament was suspended until further notice.

(The above story first appeared on LatestLY on Apr 28, 2020 08:01 PM IST. For more news and updates on politics, world, sports, entertainment and lifestyle, log on to our website latestly.com).