Ambati Rayudu Birthday Special: 100 vs SRH & Other Best Knocks by the CSK Star in IPL 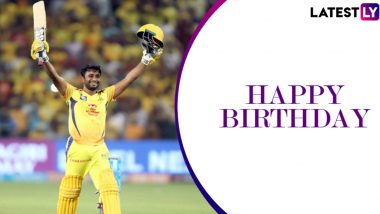 Just a few days after guiding Chennai Super Kings to a thrilling win over Mumbai Indians, Ambati Rayudu celebrates his 35th birthday on Wednesday (September 23). Born in 1985, Rayudu is a stylish batsman, and his record is impressive too. Be it stabilizing the inning after a top-order collapse or scoring quick runs in the end overs, the right-handed batsman has all the attributes to excel in white-ball cricket. Rayudu has also proved his mettle in the Indian Premier League (IPL) where he currently represents MS Dhoni-led CSK. Below, we'll look at five of his best knocks in IPL. Ambati Rayudu, Faf Du Plessis Knocks Praised by Fans After Chennai Super Kings Beat Mumbai Indians in IPL 2020 Opening Match.

Rayudu made his IPL debut for Mumbai Indians way back in 2010. The talented youngster didn't take long in making a mark as he scored a match-winning fifty on his debut. He didn't look back after that and played one impressive knock another. In fact, Rayudu played a crucial role in guiding MI to the title in 2013, 2015 and 2017. In 2018, the batsman was bought by Chennai Super Kings, and MS Dhoni made optimum utilization of him. Rayudu opened the innings for the Men in Yellow and did exceptionally well. As the veteran batsman turns a year older, let's revisit some staggering performances by the stylish batsman in IPL. I’d Put Ambati Rayudu in Suresh Raina’s No. 3 Spot at CSK, Says Scott Styris.

Playing for Mumbai Indians, the right-handed batsman put up a batting exhibition in Bengaluru as RCB were defeated in their own den. Chasing 172 for victory, MI's top order collapsed, and Rayudu came into bat at number five. The batsman built his innings to perfection and steadied the ship with Kieron Pollard. Rayudu shifted gears in the death overs and took the Zaheer Khan and others to cleaners. Riding on his efforts, Mumbai Indians crossed the line with five wickets in hand.

As mentioned above, CSK made Rayudu an opener in IPL 2018 and brought the best out of him. In the match Sunrisers Hyderabad, Rayudu showed no respect to the likes of Rashid Khan, Bhuvneshwar Kumar and slammed his maiden IPL ton. Courtesy Rayudu's spectacular knock, MS Dhoni and Co chased a total of 180 runs with ease to register a five-wicket win.

82 vs Royal Challengers Bangalore In 2018

The 2018 IPL match between CSK and RCB might be remembered for MS Dhoni's blitzes in the end overs. However, it was Rayudu who pulled things back for the visitors after a top-order collapse. Chasing 206 in Bengaluru, CSK lost wickets at regular intervals, but Rayudu didn't put his guards down and paced his innings to perfection. He scored 82 off 53 balls as Chennai won the game by five wickets with two balls to spare.

Rayudu played a fantastic knock against his former team a few days ago. Chasing 163 in the season opener, CSK lost two wickets inside the first two overs. However,  Ambati Rayudu came out to bat at number three and pulled things back for the Men in Yellow. He went on to score a sensational half-century as CSK won the game by five wickets.

With Suresh Raina not in the team, Rayudu's role becomes even more significant in the middle order. The Hyderabad-born batsman has shown good form early in the season, and he'll like to play many more match-winning knocks. Rayudu will next be seen in action when CSK takes on Shreyas Iyer's Delhi Capitals on September 25 at the Dubai International Cricket Stadium.

(The above story first appeared on LatestLY on Sep 23, 2020 08:00 AM IST. For more news and updates on politics, world, sports, entertainment and lifestyle, log on to our website latestly.com).