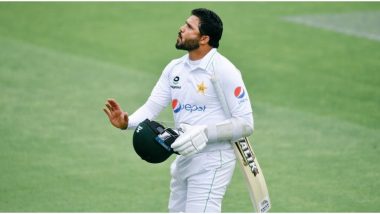 Azhar Ali’s return to the cricket field wasn’t very pleasant as he was dismissed for a duck in the first Test match between England and Pakistan at the Old Trafford in Manchester. Coming to bat at number three, the Pakistan skipper looked vulnerable against the swinging delivery of the England pacers. The red cherry passed his bat on a few occasions. However, his short stay at the crease was ended in the first ball of the 19th over. Chris Woakes bowled a sharp in-swinger which pierced Ali’s defences and hit the pad. Umpired Richard Illingworth was impressed by the appeal and he didn’t take long in raising his finger.  England Live Score Updates 1st Test 2020 Day 1.

Surprisingly, however, the visiting side’s skipper looked confident about the decision being wrong as he asked for a review straight away and that too without consulting his batting partner Shaan Masood. The DRS call proved to be a disastrous one as there wasn’t any inside edge and the ball was clearly hitting the middle stump. Pakistan lost one review and Ali invited a lot of criticism. Netizens weren’t happy seeing the dismal performance of the skipper and they trolled him. Jofra Archer, Chris Woakes Put Visitors on Back Foot

Stats Need To Be Improved!!

Younis Khan waiting for Azhar Ali after his dismissal on duck pic.twitter.com/Y3VUtNswho

Early to say but Azhar Ali might end up like Sarfraz Ahmed if we lost the series.

Earlier in the match, Pakistan won the toss and elected to bat first. Surprisingly, they added two leg-spinners – Yasir Shah and Shadab Khan – in their team which is not often seen in Test matches on England soil. On the other hand, the home side named an unchanged squad from the third Test match against West Indies.

Shaan Masood and Abid Ali gave the visitors a good start before the latter fell prey to Jofra Archer for 16. Things got worsened for Pakistan after Ali’s dismissal. However, Masood got the support of Babar Azam and the duo will want to form a substantial partnership for the third wicket.

(The above story first appeared on LatestLY on Aug 05, 2020 07:11 PM IST. For more news and updates on politics, world, sports, entertainment and lifestyle, log on to our website latestly.com).