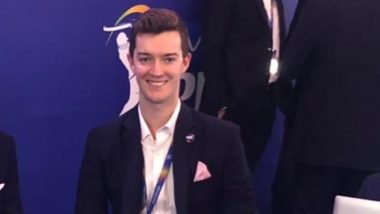 Despite the ongoing coronavirus crisis, Indian Premier League (IPL) franchise Rajasthan Royals (RR) COO Jake Lush McCrum is confident that the Board of Cricket Control of India (BCCI) will organise the 13th edition of the T20 league, which was earlier postponed indefinitely, in 2020. McCrum has said that Indian cricket board is "working really hard" to make IPL 2020 a possibility. The Royals COO also revealed that they are preparing for September-November window. Interestingly, ICC T20 World Cup 2020 is scheduled to be held in October-November in Australia. ICC has not yet postponed the World T20, which is likely to happen later. Is it Going to be IPL 13 vs ICC T20 World Cup 2020 Once Coronavirus Pandemic Ends?

"There are lot of stories in the press, but what I can say based on our conversation with the BCCI is, they are working really hard to find a solution. They are an agile association and can make it happen. We are confident that IPL will happen this year", McCrum said during 'Royal Fans Meet' interaction on Zoom.

"We are preparing for the September-November window. But nothing has been finalised as of now given the situation at hand. The great thing about BCCI is they have put together the tournament at a very short notice as well in South Africa in 2009, they can do it again," he added. IPL 2020 Only Possible if Normalcy Returns by October, Feels Former SRH Bowler Ashish Nehra.

IPL 2020 was initially scheduled to be held on March 29, but was postponed till April 15. The league was then postponed indefinitely. Sri Lanka and the United Arab Emirates had shown interest in hosting the league but BCCI has not considered the two options yet.

(The above story first appeared on LatestLY on May 20, 2020 01:45 PM IST. For more news and updates on politics, world, sports, entertainment and lifestyle, log on to our website latestly.com).