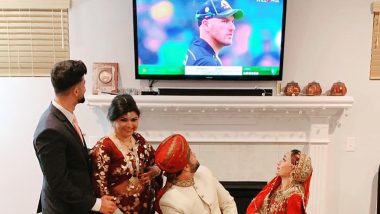 The game of cricket has a massive fan following in the world. Regardless of the age, gender and boundaries, the fans always stay glued to the television sets when it comes to the game of cricket. Now, the second match between Pakistan and Australia was being relayed and a couple who was exchanging vows was seen catching up with the proceedings of the game. The incident happened in USA where the fan named Hasan Tasleem was seen posing with the Aaron Finch on the screen. AUS Beat PAK By 7 Wickets.

The fan Tasleem submitted the picture to ICC and they shared the same on social media. He also wrote a note that he is a hardcore fan the bride is welcomed as per tradition amongst close family members. The ICC also shared the picture and note and posted the same as a couple goals. Aaron Finch had a hilarious response

Haha glad I played such a special part in your day!! 😂😂

"As a die-hard cricket fan, I want to submit a photo from my wedding this past weekend. As per tradition, after the completion of wedding, the bride is bought home for a little traditional ceremony amongst the close family. As we came home (around midnight in Detroit, Michigan, USA) the Pakistan vs Australia T20 game was getting underway. Over the years residing in North America I've stayed up at all sorts of odd hours in night to catch team Pakistan play. Even though it was my wedding night, I wasn't going to miss this game," the fan wrote. Talking about the game, Australia won the game by seven wickets with nine balls to win.

(The above story first appeared on LatestLY on Nov 06, 2019 06:14 PM IST. For more news and updates on politics, world, sports, entertainment and lifestyle, log on to our website latestly.com).