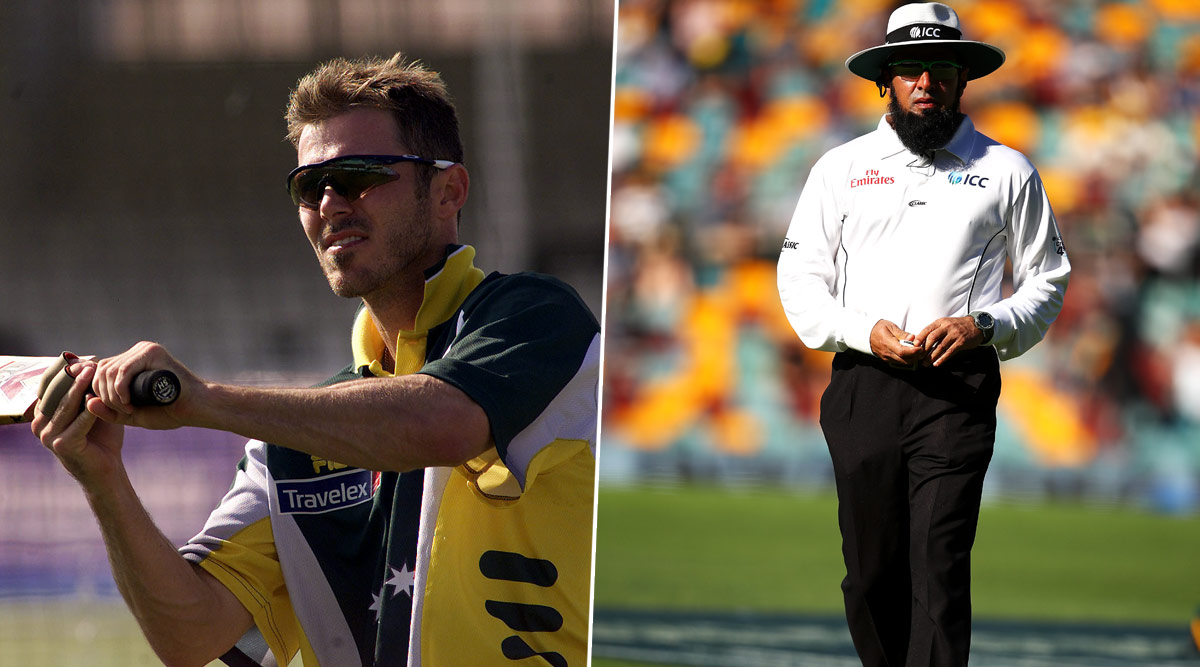 With the COVID-19 pandemic putting a pause on sporting activities across the globe, people of sports fraternity have become quite active on social media and are sharing their daily-life activities with their fans. Recently, a Twitter user shared a video of Aleem Dar’s umpiring error during the epic 2005 Ashes series where he wrongly adjudged Simon Katich out. As soon as, former Australian batsman and Katich’s ex-teammate Damien Martyn came across the footage, he slammed Dar for his glaring error and termed the decision as worst umpiring. 'MS Dhoni Got Us Over the Line', Damien Martyn Shares Old Photo With Former India Captain on Twitter.

“Worst umpiring series in history here. Hard to believe when you look back,’ Martyn wrote while retweeting the video. In this video, Katich is struck on the pads off a delivery from Steve Harmison. The pacer appealed for a LBW shout and Dar didn’t take long in raising his finger. However, the replay of the delivery clearly showed that the ball was pitched outside leg and was even missing the stumps.

Worst umpiring series in history here. Hard to believe when you look back. https://t.co/TGXQ9RHLsB

The 2005 Ashes series in England grabbed fans’ attention for various reasons and umpiring errors was one of them. Martyn, who represented Australia in 67 Tests, 208 ODIs, and 4 T20Is, also featured in that series and even, he also got out on couple of occasions owing to umpire's mistake.

Yes he was terrible as well. This is not about Australia it was about the umpires.. Just saying

The Michael Vaughan-led England side eventually won the hard-fought series 2-1. After Martyn’s comment on Dar, a fan went on to Ask his about the Steve Bucknor wrong decisions against India during the 2008 Sydney test. To which, the former right-handed batsman replied : “Yes he was terrible as well. This is not about Australia it was about the umpires.. Just saying.”

Martyn bid adieu to international cricket in 2005 and since then he donned the commentator’s hat and gave his voices in many matches. Recently, the former Aussie star also shared a throwback picture with former Indian captain MS Dhoni and called him a ‘champion.’