Ricky Ponting ix excited for the IPL 2021 to start. After guiding his Delhi Capitals side to the final last season, Ponting will want to clinch the title this season. He took to Twitter to share his excitement about the tournament and also hoped that his star players Axar Patel, Ravichandran Ashwin and Rishabh Pant maintain their rich form. 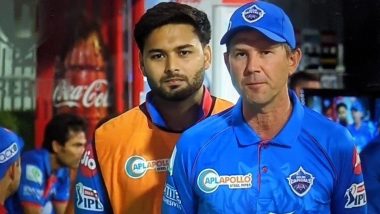 Ricky Ponting can’t wait for IPL 2021 to start. The Delhi Capitals head coach took to Twitter to express his excitement after the IPL 2021 full schedule was announced by the BCCI on March 7 (Sunday). Quoting a post from the IPL, Ponting said he couldn’t wait to reach India and get to work ahead of the IPL season start. The former Australia captain, who guided Delhi Capitals to their maiden IPL final last season, also hoped that Axar Patel, Ravichandran Ashwin and Rishabh Pant will continue their rich form in the IPL. Shikhar Dhawan’s ‘Masti’ with Rohit Sharma, Rishabh Pant & Kuldeep Yadav in Kids Zone Cannot Be Missed (Watch Video).

Axar, who made his India debut in the recently concluded India vs England Test series, finished the series with a record 27 wickets, the most by a debutant. Ashwin also showed his prowess and finished with 32 wickets to his name while also hitting a century with the bat. Pant was also on fire in the series and scored a majestic ton in the final Test. He also had scored 91 in the first Test. IPL 2021 to Starts From April 9; No Home Games, No Crowds at 6 Venues Including Mumbai Amid COVID-19 Surge.

Ricky Ponting is Excited About IPL 2021

Can't wait to get over to @delhicapitals and get to work. Hope @akshar2026 and @ashwinravi99 have some wickets left after taking all of them in the last month, and @rishabhpant17 has more runs to make! https://t.co/5Q8btBhjqq

“Can't wait to get over to @delhicapitals and get to work,” said the Delhi Capitals head coach in a tweet. “Hope @akshar2026 and @ashwinravi99 have some wickets left after taking all of them in the last month, and @rishabhpant17 has more runs to make!” Ponting quoted an IPL tweet, which revealed the complete schedule of the tournament.

Pant and Axar Patel also replied to their IPL coach and said they couldn’t wait for the tournament to start. “See you soon, coach,” wrote Axar while Pant was cheeky in his response. “Hahhahaha waiting for you Rick,” said the wicketkeeper-batsman. Take a look at the post.

Hahhahaha waiting for you Rick

Season 14 of the IPL is set to begin on April 9 with defending champions Mumbai Indians playing Royal Challengers Bangalore in the first match of the tournament. Delhi Capitals will begin their season against Chennai Super Kings a day later. The IPL will be played in six cities this season. Ahmedabad will host the playoffs as well as the final on May 30.

(The above story first appeared on LatestLY on Mar 08, 2021 02:12 PM IST. For more news and updates on politics, world, sports, entertainment and lifestyle, log on to our website latestly.com).