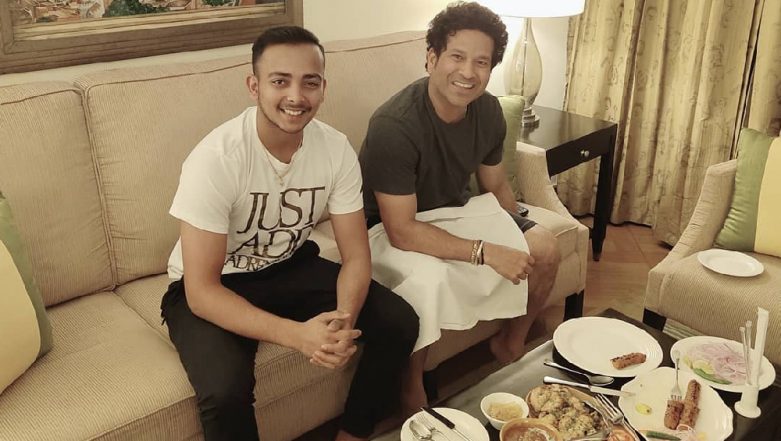 Prithvi Shaw had dinner with Sachin Tendulkar ahead of DC vs MI IPL 2019 (Photo Credits: Instagram)

"Thank you SACHIN SIR for the lovely dinner. It's always a pleasure meeting you SIR," Shaw said this in his latest social media post. Sachin Tendulkar is former Mumbai Indian captain and he is the idol for Mumbai team. Prithvi Shaw is Delhi Capitals opening batsman, he opens the inning with Shikhar Dhawan. Shaw scored 99 against Kolkata Knight Riders (KKR) in DC vs KKR, which Delhi won in the super over. DC vs KKR, IPL 2019: Prithvi Shaw Falls One Short of Century, Youngster Wins Hearts With his Quality Batting.

Prithvi Shaw had a lovely dinner with Sachin Tendulkar

Thank you SACHIN SIR for the lovely dinner ♥️ It's always a pleasure meeting you SIR 😌 @sachin_rt Sir pic.twitter.com/VLuR9Bee1O

Prithvi Shaw started playing for Delhi franchise in IPL 2018. He was the captain for India's Under 19 World Cup 2018, which India won for the 4th time by defeating Australia by 8 wickets in the final. He is the youngest Indian cricketer to make a century on his debut against West Indies on Oct 4, 2018.

Delhi Capitals has earned 10 points so far in IPL 2019 and are just below Chennai Super Kings (CSK) who are on 14 points. Shaw after his inning of 99 against KKR, hasn't played a big inning, DC will hope him to do so in the upcoming DC vs MI match.