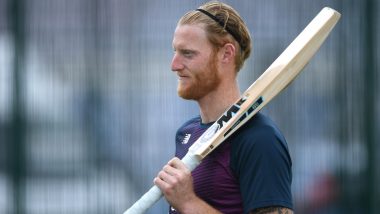 England all-rounder Ben Stokes could play the third and final Test between England and West Indies as a specialist batsman due to a slight niggle on his thigh muscle. The third Test at Old Trafford will also be the series decider with both teams currently tied on 1-1 after winning one Test each from the first two matches. Stokes was Man of the Match in the second Test, which the hosts won by 113 runs to level the series. The ICC Test all-rounder No 1 scored a magnificent 176 in the first innings and followed it with a quick-fire half-century after being sent as an opener.  Jofra Archer, James Anderson and Mark Wood Return to England Squad for 3rd Test Against West Indies at Old Trafford.

Stokes also delivered with the ball and took three wickets, becoming the fifth cricketer to score over 250 runs and also take three wickets in the same Test. His performance did lift England to a win but left him with an injury scare and a possibility of having to play the decider as a specialist batsman. Stokes faced a total of 417 deliveries in the Test and bowled 27.4 overs across both innings leaving him with a stiff quad muscle. He was also in the field for 4 ½ days in a five-day Test match. England vs West Indies 3rd Test 2020: Ben Stokes vs Kemar Roach and Other Exciting Mini-Battles to Watch Out.

It was while bowling during West Indies’ second innings that Stokes had to pull out midway through the attack. The reports at the end of the Test match showed stiffness in the muscle. England head coach Chris Silverwood had earlier suggested resting the all-rounder for the decider but captain Joe Root mentioned in his pre-match conference that Stokes will play – if not as an all-rounder then as a batsman.

“We'll have to see where Ben is at because he's still feeling it a little bit in his quad and we need to make sure he's fit to bowl," Root was quoted as saying by ESPN.  Stokes jumped to third in the ICC Test batting rankings after his display in the second Test and is also this Test series’ highest run-getter with 343 runs from four innings. "He is definitely okay to play as a batsman. It's just how much of an impact he can have with the ball throughout the whole game and in the second innings,” said Root.

The England skipper also praised his deputy for recognizing the injury threat and pulling out of the attack with minimal damage. "He's matured so much and I think we saw that when he said he wasn't quite right to finish the over," said Root, suggesting that a younger version of the cricketer would have gone through the over and bowl a couple more to try and win England the Test.

“That's a massive step forward for him. It shows his maturity with his cricket because we wouldn't have seen that a few years ago,” said Root. “He would have kept going and might have done himself some serious damage. It does take a lot to keep him down and take him out of the action."

England named a 13-member squad for the series decider, starting July 24, and will name their starting XI only in the morning of the game. If Stokes does play as a specialist batsman, the hosts could go with a four-man pace attack leaving Dominic Bess out. Root then will have to shoulder the spinner’s role.

(The above story first appeared on LatestLY on Jul 23, 2020 09:54 PM IST. For more news and updates on politics, world, sports, entertainment and lifestyle, log on to our website latestly.com).