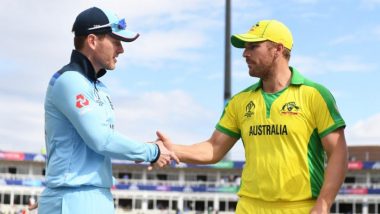 England will face Australia in a three-ODI and T20I series in September, the ICC confirmed in a tweet on Friday (August 14). Australia had already announced their preliminary squad for the T20I and ODI series although dates were yet to be confirmed. The ECB were reportedly waiting for approval from the Australian Cricket Board and the Australia government before making the official announcement. The schedule of Australia’s tour of England for a three-match T20I and ODI series is expected to be announced soon. Reports state that the series will end on September 16 with the IPL 2020 starting three days later. Hard for Stuart Broad, James Anderson to Play Together in Australia, Feels Peter Siddle.

ICC in a post on its official twitter account confirmed that England will host Australia in a three-match ODI and T20I series respectively. “ECB have confirmed that England will host Australia for three T20Is and as many ODIs in September,” the tweet said. According to reports from Australian media, the tour could begin with the T20Is on September 4. Both teams are expected to play every alternate day in the two-week series. IPL 2020 Players Update: David Warner, Ben Stokes, Steve Smith, Other England and Australian Cricketers to Miss First Few Matches of Indian Premier League Season 13?

JUST IN: ECB have confirmed that England will host Australia for three T20Is and as many ODIs in September. pic.twitter.com/iJcbLMTvH7

Australia last played an international match on March 12 against New Zealand and will be making their return to international cricket after a five-month hiatus due to the coronavirus pandemic. England, meanwhile, recently played a three-ODI series against Ireland, which they won 2-1 and have also played Test series against West Indies and Pakistan respectively. They beat West Indies 2-1 and currently lead Pakistan 1-0.

(The above story first appeared on LatestLY on Aug 14, 2020 11:29 AM IST. For more news and updates on politics, world, sports, entertainment and lifestyle, log on to our website latestly.com).