England vs Australia 3rd T20I 2020: David Warner vs Jofra Archer and Other Exciting Mini Battles to Watch Out in Southampton 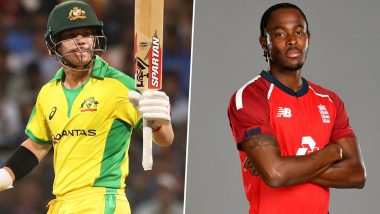 England will take on Australia in the third and final T20I game of the three-match series. The clash will be played at the Rose Bowl Cricket Stadium on September 8, 2020 (Tuesday). The hosts have already wrapped up the series and will be looking to complete a clean sweep over the Australians. But England will have to without star Jos Buttler who will be unavailable for this clash after leaving the bio-secure bubble. Jos Buttler Ruled Out of Third T20I Against Australia After He Left Bio-Secure Bubble to Meet Family.

In their first competitive series post lockdown, Australia have given a good account of themselves but haven’t managed to turn good performances into results. So the onus will be on Aaron Finch and his team to register their first win in the series. The visitors have struggled in the middle over and need to get the issue sorted out in the final game. So as the two teams face each other in the last game of the series, here are some mini battles to look out for. England vs Australia 3rd T20I 2020: Southampton Weather and Rain Forecast, Check Pitch Report of Rose Bowl Cricket Ground.

David Warner played a brilliant knock in the first game but was troubled and dismissed by Jofra Archer in the second match. The Australian batsmen will play a crucial part in determining the game's result but need to get past Archer’s pace and accuracy in the opening part of the clash.

Dawid Malan has been the most consistent English batsmen post lockdown and has continued his form in this series as well. The 33-year-old has scored good runs in his previous two games and the onus of stopping him from doing that will be on Adam Zampa. The spinner hasn’t enjoyed a great series but will look to put on a great performance in the final game.

The England captain has been underwhelming this series but his batting prowess wasn’t much needed by the national team. However, with a number of changes expected by the home team, Morgan could play a huge role in this game. Pat Cummins has IPL on his mind but has been poor during this series and will be looking to put on a great performance in this game.

(The above story first appeared on LatestLY on Sep 08, 2020 05:27 PM IST. For more news and updates on politics, world, sports, entertainment and lifestyle, log on to our website latestly.com).