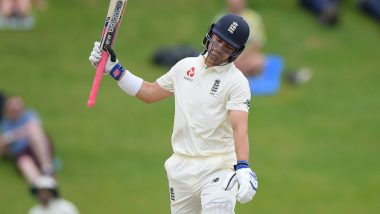 Finally, after 117 days, the cricketing action resumed the game between England and West Indies in Southampton. However, it was the rain that played the spoilsport as day 1 witnessed only 106 balls. After winning the toss, England opted to bat first and the hosts lost the first wicket, Dominic Sibley on the score of 0. The first wicket was lost in the first over with no runs scored. England could play for 17.4 overs for the loss of one wicket and the team only scored 35 runs. Let's have a look at three-point highlights: England vs West Indies Highlights 1st Test 2020, Day 1: Rain Cuts Short Play, ENG 35/1 at Stumps.

The world had come to standstill with the menace of the coronavirus and the sporting tournaments had gone for a toss. But with the England vs West Indies resuming, the cricketing action resumed and the fans had a sigh of relief. The match was played at Southampton Cricket Ground.

Now before the start of the game, the teams offered one-minute silence to mourn the loss of former West Indian legend Sir Everton Weekes who passed away last week. The players also took one knee in order to support the campaign Black Lives Matter which gained a lot of popularity after the death of George Floyd in the USA.

Here was another highlight for the day when the team lost the wicket of Dominic Sibley quite early in the game. It was Shannon Gabriel who was handling the bowling duties for the Windes and he snapped the wicket of Sibley.

As of now, the team has Rory Burns and Joe Denly who are looking solid for the team and are fighting hard to give England a better start for the match. Stay tuned with us for the more updates on day 2 which will happen tomorrow.

(The above story first appeared on LatestLY on Jul 08, 2020 11:24 PM IST. For more news and updates on politics, world, sports, entertainment and lifestyle, log on to our website latestly.com).