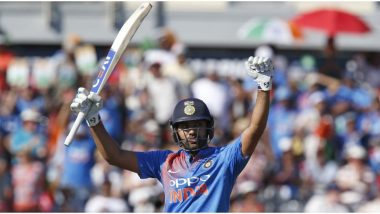 One of the best batsmen going around in international cricket, Rohit Sharma completed 13 years in international cricket on Tuesday (June 23, 2020). On the occasion, fans of the Hitman went berserk and flooded the social media with his records. In fact, #13YearsOfHITMAN became one of the top trends on Twitter. The Mumbai-born cricketer made his international debut in an ODI match against Ireland in 2007. Rohit didn’t get to bat in that match as India won the game by nine wickets. However, the 20-year-old didn’t take long in showcasing his potential. Courtesy his hitting ability, Rohit was picked in the Indian team for 2007 T20 World Cup and he justified the decision by scoring 30 off just 16 balls in the finals against Pakistan. This Day That Year: Rohit Sharma Made His Debut for India.

He played several impressive knocks in the middle order but faced a lot of criticism for not delivering consistently. However, the then Indian skipper MS Dhoni asked him to open the innings and the World saw a different Rohit Sharma altogether. He played one jaw-dropping knock after another and impressed one and all. In fact, he is the only batsman to date to have scored three double hundreds in ODIs and four centuries in T20Is. Also, the swashbuckling batsman proved his mettle as a captain as he guided Mumbai Indians to four titles in Indian Premier League (IPL). Meanwhile, let’s look at how fans hailed Rohit on the occasion.

What A Knock That Was!!

Getting Strong Every Year!!

On this day in 2007, Rohit Sharma made his debut against Ireland.

A journey full of ups and downs, countless criticism and lots of sleepless nights. From being ordinary middle order batsman to one of the best openers of the game, Rohit completes 13 years.#13YearsOfHITMAN pic.twitter.com/Avyi2pD4t7

Highest scores on debut inngs for India batting at no.6 or lower

And it's a moment of history for ROHIT Sharma #13YearsOfHITMAN pic.twitter.com/pmld6Wq6NE

Most Sixes Against Australia In ODIs - 😎

Some One Smashing Australia Like This, He Is Not Great He Is G.O.A.T 🐐#13YearsOfHITMAN pic.twitter.com/iUCvFYMZQl

With being just 33, a lot of cricket is certainly left in the star batsman and he’ll certainly add many more feathers to his already illustrious hat. He was last seen during the T20I series against New Zealand where he sustained a calf injury in the last game. However, he seems to be fit at the moment and is raring to get back on to the field.

(The above story first appeared on LatestLY on Jun 23, 2020 01:28 PM IST. For more news and updates on politics, world, sports, entertainment and lifestyle, log on to our website latestly.com).