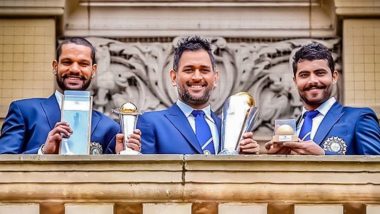 On the day (June 23, 2013) India lifted ICC Champions Trophy as MS Dhoni-led side defeated hosts England. Rains in Birmingham played the spoilsport and only 20 overs per side contest was possible. Put to bat first, India managed only 129 for seven in 20 overs. Virat Kohli, who batted at number three, was top-scorer for India with 43 runs. However, towards the end, Ravindra Jadeja played a valuable cameo of unbeaten 33 off 25 balls. In response, England managed only 124 for eight and lost the match by five runs. This Day That Year: MS Dhoni Became the Only Captain to Win All Three ICC Trophies As India Won Champions Trophy in 2013.

The trophy was Dhoni’s third in ICC tournaments. Under Dhoni’s captaincy, before the 2013 Champions Trophy win, India had won 2007 World T20 and 2011 50-over World Cup. With it Dhoni became the first and only captain to win all three ICC trophies. Meanwhile, fans took to Twitter and recalled India’s memorable win. Here are some of the reactions. R Ashwin Reveals How MS Dhoni Boosted His Confidence During 2013 Champions Trophy.

This day, that year. Excitement was real. 1-day to T20. @ImIshant getting those 2 successive wickets. What a final!💥

2013 will remain the most memorable yr in Indian Cricket. #championstrophy pic.twitter.com/ePbbMBuUre

Young Indian Team made it Possible with Team Work 💪🔥

Dhoni With the Trophy

On this day msdhoni became the first Captain to win all ICC trophy#championstrophy pic.twitter.com/cXPJrrLX4J

Apart from scoring valuable runs, Jadeja picked two important wickets as well. The all-rounder was adjudged Man of the Match. Jadeja emerged as highest wicket-taker in the tournament as he scalped 12 wickets. Opening batsman Shikhar Dhawan was named Player of the Series for 363 runs at an impressive average of 90.75, which included two centuries and one half-century from five matches.

(The above story first appeared on LatestLY on Jun 23, 2020 12:02 PM IST. For more news and updates on politics, world, sports, entertainment and lifestyle, log on to our website latestly.com).