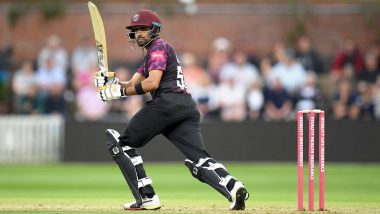 Babar Azam boasts off a staggering record in white-ball cricket and his performances in the past few years have been nothing short of sensational. Owing to the fact, England-based club Somerset signed the star batsman for Vitality T20 Blast 2020. However, the Pakistan skipper has put up an underwhelming show so far with scores of 6, 0 and 10 runs respectively after a solid 42 in his first game of the side. Azam's last outing was against Gloucestershire where his poor form continued, scoring just ten runs off 17 balls. The star batsman looked gutted with his performance and adding salt to his wounds, Gloucestershire brutally trolled the Pakistan cricketer on Twitter. Babar Azam Looks Like a Lost Cow to Me, Says Shoaib Akhtar.

"Rankings don't matter on the pitch," Gloucestershire wrote on the micro-blogging website while sharing highlights of Azam's innings. For the unversed, the 25-year-old Pakistan batsman is the second-ranked batsman T20I. He even was the top-ranked batsman for a long period before England's Dawid Malan piped him just more than a week ago. Meanwhile, have a look a Gloucestershire's dig for the Pakistan skipper.

Speaking of the game, Gloucestershire posted a mammoth score of 205-6 while batting first. Ian Cockbain top-scored with 50 while Benny Howell gave a fiery finish to the side, scoring unbeaten 49 off just 18 balls in the final overs. Chasing the massive total, Somerset got off to a miserable start with openers Steven Davies and Babar Azam getting dismissed inside five overs. Will Smeed (82) tried to make a fightback alongside skipper Lewis Gregory (38), but the task proved to be too much as Somerset were restricted to 192/8, losing the game by 11 runs.

(The above story first appeared on LatestLY on Sep 16, 2020 02:14 PM IST. For more news and updates on politics, world, sports, entertainment and lifestyle, log on to our website latestly.com).