The right-handed batsman was an integral part of the Aussie team which dominated World cricket in the first decade of 2000. His ability to time the ball was sensational and his numbers in international cricket speak volume about his capabilities. 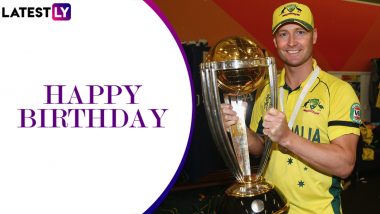 Former Australian captain Michael Clarke celebrates his 39th birthday on Thursday (April 2, 2020) and wishes are pouring in for the legendary cricketer from all over the world. The right-handed batsman was an integral part of the Aussie team which dominated World cricket in the first decade of 2000. His ability to time the ball was sensational and his numbers in international cricket speak volume about his capabilities. Along with that, Clarke was a prolific captain too and has guided Australia to many victories including the 2015 World Cup title. This Day That Year: When Australia Lifted the Cricket World Cup for Fifth Time.

Making his international debut in January 2003, the talismanic cricketer served Australian cricket for over a decade. Speaking of his illustrious record, the star batsman scored 8643 runs from 115 Test matches and 7981 runs from 245 ODI matches. In T20Is, Clarke has amassed 488 runs from 34 matches. He was quite a handy bowler too and even has a hat-trick in Test cricket. Well, anyone could boast of such numbers and thus, Clarke has gained a lot of fans from all around the world. Meanwhile, let's look at how Twitterati wished the Aussie legend.

Wishing you a great year ahead champion. One of my favourite Australian cricketer. A great leader , match winner and one of best batsman. World cup hero and Captain of Australian great test Team. Happy birthday @MClarke23 #happybirthdayclarke #michaelclarke #cricketaustralia pic.twitter.com/4ijztgQSMs

🏏He is the only cricketer to smash four double centuries in a calendar year...

In 2012, the star batsman was at the peak of his powers where he piled up a mountain of runs and crashed many prominent records. Clarke piled up four double centuries in that year, becoming the only batsman to do so. He also led his side to a memorable 5-0 triumph in 2013-14 Ashes. Clarke bid adieu to all forms of cricket in 2015 and passed the baton to Steve Smith. Post-retirement, Clarke donned the commentary hats and gave his voice in many matches.

(The above story first appeared on LatestLY on Apr 02, 2020 02:15 PM IST. For more news and updates on politics, world, sports, entertainment and lifestyle, log on to our website latestly.com).