Happy Birthday Yuzvendra Chahal: Fans Storm Twitter with Greetings for the Indian Leg-Spinner As He Turns 30 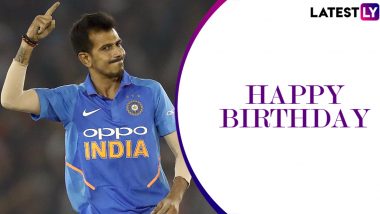 One of the best leg-spinners going around in World cricket, Yuzvendra Chahal turns 30 on Thursday (July 23, 2020) and birthday wishes are pouring in for him from all around the world. The Indian leg-spinner is a vital cog of the Indian team in white-ball cricket and his numbers speak volumes of his prowess. Despite not being a huge turner of the ball, Chahal has bamboozled the best of the batsmen with his street-smart bowling. The star bowler doesn’t give many run-scoring opportunities which force the batsmen to make a mistake. The Haryana-born bowler has formed a formidable pair with Kuldeep Yadav and together, the duo has tormented many potent batting line-ups. Yuzvendra Chahal Birthday Special: Three Memorable Games of RCB Spinner in IPL.

Chahal burst onto the scenes in the 2014 edition of the Indian Premier League (IPL) where he delivered several spectacular performances while playing for Royal Challengers Bangalore (RCB). Two years later, the leggie made his international debut and didn’t look back after that. So far, Chahal has claimed 91 and 55 wickets from 52 ODIs and 42 T20Is. Along with his bowling prowess, the bowler is also famous for his ‘great sense of humour’ and one can visit his social media account to verify the fact. Meanwhile, let’s look at how Twitterati wished the veteran cricketer. Happy Birthday Yuzvendra Chahal: A Look At 5 Funny Moments of the Spinner As he Turns 30.

Happy birthday one of the best nd my fav spinner @yuzi_chahal u r a gem ❣️❣️keep rocking on nd off field wid ur performance 😌❣️❣️ #HappyBirthdayChahal pic.twitter.com/YvVVoO2MNG

Only Indian player To hit Winning run in the No.11 position in T20

From Chess To Cricket!!

Happy Birthday to the 'SPIN WIZARD' of Indian Cricket-@yuzi_chahal

The leg-spinner was last seen during the ODI series between India and New Zealand earlier this year. Also, Chahal has resumed training after the COVID-19 break and is raring to get back onto the field. As BCCI is planning to conduct IPL 2020 in September- October in UAE, Chahal will have to be at his best in order to guide RCB to their maiden title. However, the leggie might take the field even before IPL as some stakeholders in BCCI want India to play a T20I series against South Africa ahead of the marquee tournament.

(The above story first appeared on LatestLY on Jul 23, 2020 09:54 AM IST. For more news and updates on politics, world, sports, entertainment and lifestyle, log on to our website latestly.com).