India women's cricket team captain Harmanpreet Kaur will return for a second season of the Women's Big Bash League (WBBL) with the Melbourne Renegades later this year after the reigning 'Player of the Tournament' signed up with the club on Monday. 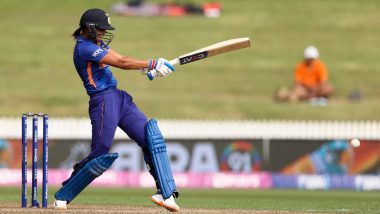 Melbourne, July 4 : India women's cricket team captain Harmanpreet Kaur will return for a second season of the Women's Big Bash League (WBBL) with the Melbourne Renegades later this year after the reigning 'Player of the Tournament' signed up with the club on Monday. One of the most accomplished batters in the world, the 33-year-old has represented India on almost 250 occasions across all three formats of the game. India Women vs Sri Lanka Women 2nd ODI 2022 Free Live Streaming Online: Get Free Live Telecast of IND W vs SL W Cricket Match on TV With Time in IST.

Harmanpreet was the Renegades' leading run-scorer and wicket-taker in WBBL-07 as they returned to finals action. The right-hander scored 406 runs at an average of 58 -- including 18 sixes, the most in the competition -- and claimed 15 wickets with her off-spin. "I'm excited to be coming back to the Renegades," Harmanpreet was quoted as saying by melbournerenegades.com.au. "I really enjoyed being part of the team environment last season and feel like that helped me produce some of my best cricket.

"Personally, I just wanted to play my role for the team and it was pleasing to be able to do that. We supported each other as a team last year and were able to get some good results, but we still have plenty of room to improve. Hopefully we can do that, make the finals again and put ourselves in a position to compete for the title." Harmanpreet had polled 31 votes to win the WBBL-07 'Player of the Tournament' award and was also named in the 'Team of the Tournament'. Batting primarily at No. 4, the right-hander was a match-winner for the Renegades on multiple occasions throughout last season, including a superb unbeaten innings of 73 from just 46 balls to track down 161 against the Adelaide Strikers in Perth. India vs Northamptonshire T20 Practice Match Video Highlights: Harshal Patel Shines In Close Win.

"We couldn't be more excited to have Harmanpreet returning to our club this summer," Melbourne Renegades GM, James Rosengarten, said. "Harmanpreet is one of the best players in the world, her record speaks for itself. She was outstanding for us last season and was a match-winner on multiple occasions, having a prolific impact across the tournament with both bat and ball. As an experienced player, Harmanpreet's leadership and calm approach under pressure was a huge asset for our team. She was a great fit both on and off the field and really bought into our team environment," he added.

(The above story first appeared on LatestLY on Jul 04, 2022 10:25 AM IST. For more news and updates on politics, world, sports, entertainment and lifestyle, log on to our website latestly.com).