ICC Asks Proof From Fan Who Claims to Bowl Like Jasprit Bumrah, Netizens Join In Trolling The Overconfident Spectator! 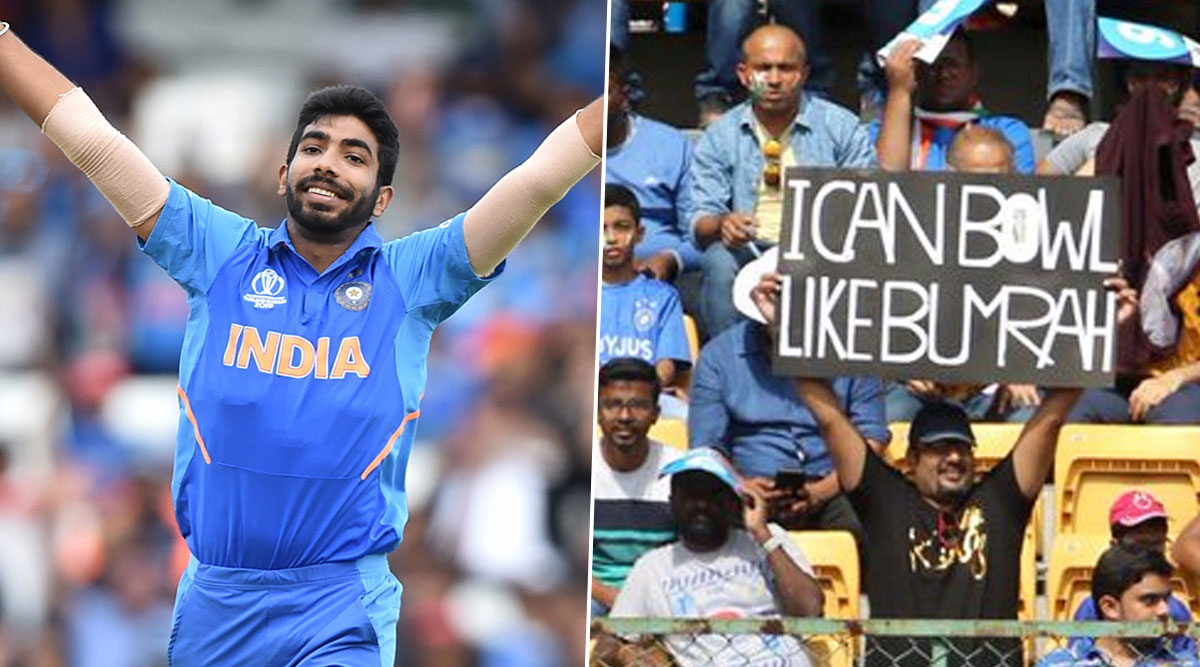 Jasprit Bumrah might not have enjoyed a great outing in the recently concluded India vs Australia ODI series but the right-arm pacer is still one of the best bowler going around and his record speaks for himself. Be it unsettling the batsman with a vicious bouncer or rattling his stumps with a toe-crushing yorker, Bumrah has the ability to pierce the defences of any batsman. Even, a lot of bowlers must also be dreaming to bowl like Bumrah but replicating the pacer’s brilliance is certainly not easy. However, a spectator, during the 3rd India vs Australia ODI at the M.Chinnaswamy Stadium in Bengaluru, claimed that he can bowl like the speedster and the International Cricket Council (ICC) asked him for a proof. Aakash Chopra Shuts Down a Troll Who Called Him 'Virat Kohli's Chamcha.'

In a snap posted by the official Twitter handle of the ICC, a man can be seen holding a poster which says “I can bowl like Bumrah.” Well, the Twitter handle of the apex cricket body tried to pull the leg of the fan by asking for proof in the caption. A lot of fans also joined ICC in the trolling process and replied with various hilarious comments and memes on the post. Well, Bumrah is currently placed at the pinnacle of the ICC ODI bowler’s rankings and thus, one can certainly get away after announcing to bowl like him. Meanwhile, let’s look at some of the hilarious memes and comments in the picture posted by ICC.

Speaking of the India vs Australia 3rd ODI match, Aaron Finch won the toss in the deciding encounter and opted to bat first. Steve Smith scored a century and helped the visiting side post 286 runs in the first innings. In reply, Rohit Sharma scored a scintillating century and skipper Virat Kohli also played a valuable hand of 89 runs. Their effort proved to be fruitful as the Men in Blue clinched the encounter by seven wickets and won the series 2-1.