Bangladesh, playing Australia for the first time in any format, chose to take pace off the ball throughout but allowed the hosts to post 189 for one, the top score at the tournament so far. In reply, they batted bravely with Fargana Hoque Pinky top-scoring with 36 and falling narrowly short of 1,000 runs in the T20I format. 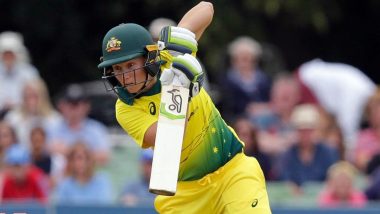 Canberra, February 27: Alyssa Healy says tough chats among Australia's batting group have helped them get back on track after beating Bangladesh at the ICC Women's T20 World Cup.

The keeper-batter was stuck in single digits in the recent tri-series with England and India but tournament play has once again brought out her best as she raced to 83 in an 86-run victory. ICC Women's T20 World Cup 2020: Need to Keep up Momentum to Make it to Final, Says India Wicketkeeper Tanya Bhatia.

"We've spoken about not doing our job as a batting group, so to go out there and put a good score on the board on a low and tricky wicket was pretty great," said Healy.

"There's been a lot of pressure on us to perform as a batting group, we haven't felt that from the inside, but we'll take a lot of confidence from executing our skills.

"Those tough discussions are part and parcel of being an elite sports team and being a really tight-knit group like we are. "It's not always easy to be honest but this team really seems to be quite good at it and we can call things out when they happen.

"To sit down as a batting group and identify areas we could be doing better was great for the group. "Sometimes you know they're there, but when you verbalise it, it reinforces it in your own mind. I thought it was great so to come out tonight and respond to that was fantastic."

Beth Mooney played foil to Healy, emerging with an unbeaten 81 from 58 balls and assembling a 151-run partnership which was Australia's highest for any wicket at the Women's T20 World Cup. ICC Women's T20 World Cup 2020: No Chance Pakistan Will Catch England Cold, Says Lauren Winfield.

Bangladesh, playing Australia for the first time in any format, chose to take pace off the ball throughout but allowed the hosts to post 189 for one, the top score at the tournament so far. In reply, they batted bravely with Fargana Hoque Pinky top-scoring with 36 and falling narrowly short of 1,000 runs in the T20I format.

Fargana's 50-run partnership with Nigar Sultana Joty was Bangladesh's second half-century stand at the Women's T20 World Cup and formed one of the positives for Salma Khatun's side. Fargana felt a clutch of dropped catches helped Australia reach an unassailable target.

"Australia are the world champions and from our side, it was the first time we'd ever played them," said the batter. "It was tough to face their bowling but after having the first match, it will give us experience on how to handle the situation in these conditions, which are very new to us.

"In our team meeting, it was discussed to build partnerships and I tried to follow that instruction. I tried to play ball-by-ball and build a partnership with Nigar in the middle. ICC Women’s T20 World Cup 2020 Time Table & Schedule in IST for Free PDF Download Online: Check Fixture Dates, Match Timings, Venue Details of Twenty20 CWC in Australia.

"It would have been better if we'd taken our catches, in that case we could have restricted them to 160. We need to improve our fielding going into the next matches."

(The above story first appeared on LatestLY on Feb 27, 2020 06:49 PM IST. For more news and updates on politics, world, sports, entertainment and lifestyle, log on to our website latestly.com).