There won’t be any home advantage for any of the teams. However, New Zealand might feel somewhat comfortable than India and here are few reasons why we think, the Blackcaps will emerge victorious. 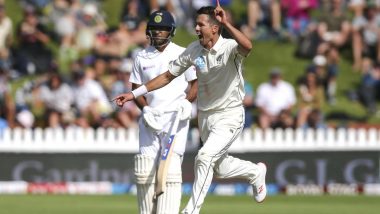 India and New Zealand take on each other in the inaugural ICC World Test Championship (WTC) final at the Rose Bowl Cricket Ground in Southampton, England. Both the teams made it to the summit clash after finishing on top of the ICC WTC 2019-21 points table. And now both India and New Zealand will be looking to get their hands on the trophy. India’s Test Record in England Ahead of ICC WTC 2021 Final Against New Zealand.

The one-off Test takes place at a neutral venue and that makes the contest more interesting. There won’t be any home advantage for any of the teams. However, New Zealand might feel somewhat comfortable than India and here are few reasons why we think, the Blackcaps will emerge victorious.

Conditions Suit New Zealand: The Kane Williamson-led side will have slight advantage going into the match. New Zealand will feel home like conditions as both in England and New Zealand pace bowlers get assistance. India, on the other hand, bank largely on spinners and in Southampton the pitch might not be that affective for the spinners. India vs New Zealand, WTC Final 2021 Date, Match Timing, Venue, Squads, Broadcast Rights and All You Need to Know.

Game Time: New Zealand will head into the ICC WTC final after the two-match Test series against England. On the other hand, India will directly take field in the ICC WTC final. So, lack of game time might hinder India and work in favour of Kiwis.

(The above story first appeared on LatestLY on May 30, 2021 11:34 PM IST. For more news and updates on politics, world, sports, entertainment and lifestyle, log on to our website latestly.com).