India will play Australia in the first ODI game of a three-match series hoping to start their tour of Australia with a win. This will be India's first international match since the series against New Zealand in March while Australia have already played England in ODI and T20I series. The ODI series will also begin the month and a half long series. 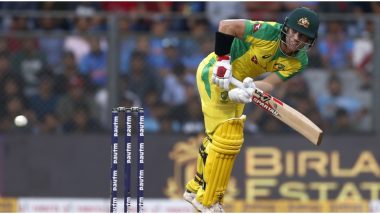 India will play Australia in the first game of a three-match ODI series in Sydney on November 27 (Friday). The match will be India’s first foray in international cricket after a COVID-19 induced eight months gap while Australia have already got some experience of cricket matches during a pandemic in their short tour of England two months ago. This game will also mark the return of fans into cricket stadiums with Australia allowing 50 per cent capacity in stadiums. The match also provides an opportunity for fans of Dream11 fantasy game to pick the right team, captain and vice-captain and win prizes. Here we bring you all tips and predictions for the IND vs AUS 1st ODI match. IND vs AUS 1st ODI 2020 Dream11 Team: Virat Kohli, David Warner, Jasprit Bumrah and Other Key Players You Must Pick in Your Fantasy Playing XI.

Fans playing Dream11 fantasy game must know that the captain of you fantasy XI fetches 2x points while the Vice-captain gets 1.5x points. So it is important to pick the right captain and vice-captain for the Dream11 fantasy XI. Both India and Australia will want to begin the series with a win in their first match and take a 1-0 lead in the three-match series. AUS vs IND Dream11 Team Prediction: Tips to Pick Best Fantasy Playing XI for Australia vs India 1st ODI 2020.

The Indian captain has a sub-par IPL 2020 and will be playing his first ODI game since February when India toured New Zealand. Kohli also bats on a different level against Australia and has already scored five ODI hundreds against the Aussies. He also averages 50.17 against Aaron Finch’s men. It is difficult to look beyond Kohli as the captain and he is an ideal choice for every Dream11 fantasy team.

The Australia opening batsman was the third-highest run-scorer in IPL 2020 with 548 runs in 16 games. He struggled against England in the ODIs and had the highest score of 24 in the three-match ODI series. But at home, Warner is a different beast at home and will be looking to give Australia a big start at the start of their innings. He should be made the vice-captain for the IND vs AUS 1st ODI match.

(The above story first appeared on LatestLY on Nov 26, 2020 08:11 PM IST. For more news and updates on politics, world, sports, entertainment and lifestyle, log on to our website latestly.com).