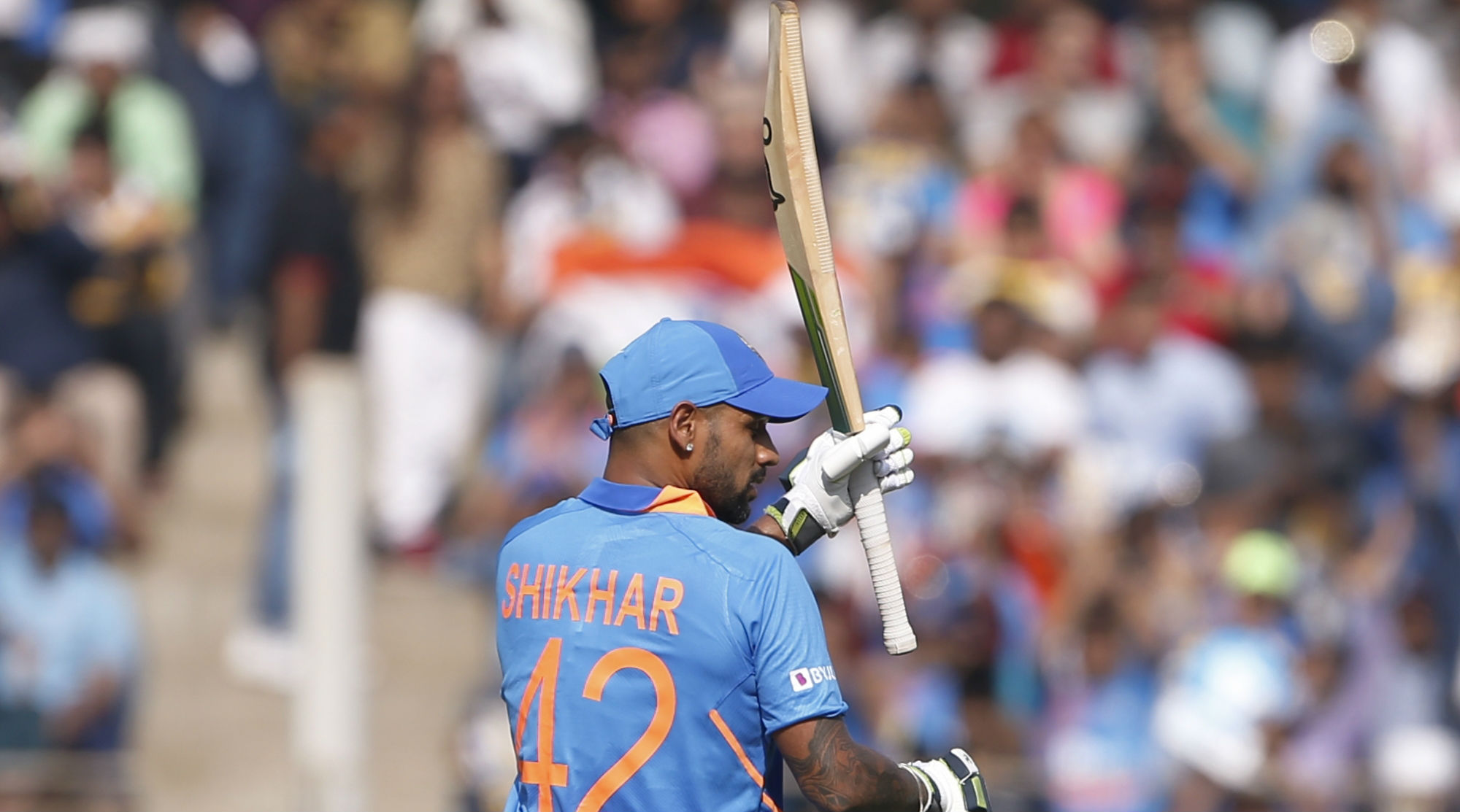 Mumbai, January 14: Opener Shikhar Dhawan roared back to form with a crisp half-century but India struggled to get going as Australia bowled them out for 255 in 49.1 overs in the first of the three ODIs at the Wankhede Stadium on Tuesday.

Dhawan, who returned to international cricket against Sri Lanka in the just concluded T20Is after an injury, opened the batting with Rohit Sharma, under pressure from K.L. Rahul who made the most of his absence to score heavily. India Vs Australia, Live Cricket Score 1st ODI Match.

As stated by skipper Virat Kohli on the eve of the first ODI, India played both Dhawan and Rahul with the latter batting at No.3 with Kohli dropping down at four.

Dhawan made 74 from 91 balls with the help of nine fours and one six as Rahul also scored a good-looking 47, but Australian pacers led by Mitchell Starc (3/56) kept taking wickets at regular intervals to keep the Indians in check.

Besides Starc, Pat Cummins (2/44) and Kane Richardson (2/43) took two wickets each with spinner Adam Zampa (1/53) and Ashton Agar (1/56) scalping one apiece. The hosts lost Rohit (10) early, the local boy getting caught at mid-off by David Warner off Starc.

Dhawan and Rahul, locked in the battle for an opening spot especially in T20Is ahead of the World Cup, joined hands for a solid 121-run partnership for the second wicket before India lost four wickets in the space of five overs between 28-33.

Dhawan took on the bowlers initially with some exquisite shots while Rahul also joined in after some time. The southpaw brought up his 27th fifty off 66 balls but at the other end, Rahul missed out on his as he chipped a length ball from Agar to Steve Smith at cover when he was on 47 (61balls; 4x4).

In the next over, Dhawan followed suit, as skipper Aaron Finch's bowling change worked with Cummins having the Delhi batsman caught by Agar at cover with a well disguised slower delivery. Virat Kohli Dismissed Cheaply By Adam Zampa During India vs Australia 1st ODI 2020, Twitterati Pokes Fun at Indian Skipper.

Batting at No.4, Kohli then underlined his intent from the word go by slapping Zampa for a six over the long leg fence but in the very next delivery was caught and bowled to fall again to the Aussie spinner, who had him out in the last series also which the Aussies won 3-2.

Shreyas Iyer departed in the next over with Starc getting the ball to angle away from the batsman and found his outside edge for wicketkeeper Alex Carey to take an easy catch.

It was upto Rishabh Pant and Ravindra Jadeja then to avoid a potential collapse and the pair did well to forge a 49-run stand for the sixth wicket but in the end fell to the Aussie pacers' guile as Richardson first had Jadeja (25) caught behind with Cummins removing Pant (28) who was caught towards point by Ashton Turner. From there on, it was all downhill for India despite Shardul Thakur (13) and Kuldeep Yadav (17)'s late mini flourish.