India need to avoid defeat to clinch the Test series, which they currently lead 2-1, as well as book their spot in the IC World Test Championship final. England must produce a result to save a series loss. Joe Root’s men have already been knocked out from the contention of the WTC final. England were cleaned within two days in the previous Test. 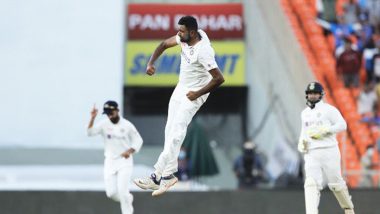 India and England clash in the final Test of the four-match series. The series is crucial for both teams with India needing to avoid defeat to clinch the Test series, which they currently lead 2-1, as well as book their spot in the IC World Test Championship final. England must produce a result to save a series loss. Joe Root’s men have already been knocked out from the contention of the WTC final. India vs England fourth Test will be played at the Narendra Modi Stadium from March 04 (Thursday). England were cleaned within two days at this same venue in the previous Test – a day-night fixture. IND vs ENG Dream11 Team Prediction: Tips To Pick Best Fantasy Playing XI for India vs England 4th Test 2021.

Despite holding an unassailable lead heading into the final Test, India captain Virat Kohli warned his side won’t play for a draw and want to seal their place in the WTC final with another convincing win. Meanwhile, if you are looking for the IND vs ENG 4th Test 2021 Dream11 team selection along with the recommendation for captain and vice-captain, you have come to the right page. India Likely Playing XI for 4th Test vs England: Probable Indian Cricket Team Line-Up for Last Match in Ahmedabad.

Dream11 fantasy fans will know that the captain of your fantasy XI fetches 2x points while the Vice-captain gets 1.5x points. So it is essential to pick the right players for these two crucial slots. Both teams have a number of match-winners in them so picking the captain and vice-captain is difficult. But take a look at these players who could make the perfect captain and vice-captain in your fantasy XI for the fourth Test. England Likely Playing XI for 4th Test vs India: Probable England Cricket Team Line-Up for Last Match in Ahmedabad.

With 24 wickets in three Tests, Ashwin is the highest wicket-taker in the series and also the third-highest run-getter. Ashwin has picked two five-wicket hauls in the first three Tests and would once again be key for India at the Narendra Modi Stadium for the fourth Test which is expected to be another turning track. Apart from Bamboozling the England batsmen with his willy spin, Ashwin will also be handy with the bat for India. He has to be the first choice player to be picked as the captain.

Rohit looked like he batted on a different pitch in the last two Test matches. His 161 in the second Test at Chennai made the difference and helped India bounce back in the series with a massive win. He was once again the star with the bat in the pink-ball Test scoring a brilliant half-century in the first innings to give India an important 33-run lead. Then in the second innings, he helped India chase down 49 runs in just 7.2 overs without any hiccups. Rohit has looked by far the best batsman in the last two Tests and should be made the vice-captain.

(The above story first appeared on LatestLY on Mar 01, 2021 05:29 PM IST. For more news and updates on politics, world, sports, entertainment and lifestyle, log on to our website latestly.com).