Stakes will be incredibly high when India and England lock horns in the third encounter, a Day-Night Test, of the four-match series. The much-awaited encounter gets underway on February 24 (Thursday) at the newly-inaugurated Motera Cricket Stadium, the world's largest cricket venue. 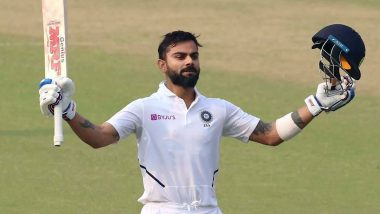 Stakes will be incredibly high when India and England lock horns in the third encounter, a Day-Night Test, of the four-match series. The much-awaited encounter gets underway on February 24 (Thursday) at the newly-inaugurated Motera Cricket Stadium, the world's largest cricket venue. With the series poised at 1-1 after the first two games, the winner of this encounter would take an unassailable 2-1 lead. Moreover, the loser would get knocked out of the ICC World Test Championship final race.  Although Virat Kohli and Co must be confident after their 317-run triumph in the previous game, the Three Lions would back themselves to come back in the Pink-Ball Test. IND vs ENG Dream11 Team Prediction: Tips To Pick Best Fantasy Playing XI for India vs England 3rd Test 2021.

Meanwhile, you have arrived at the right platform, if you are looking for IND vs ENG 3rd Test 2021 Dream11 team selection along with the recommendation for captain and vice-captain. Fans playing Dream11 fantasy game must know that the captain of your fantasy XI fetches 2x points while the Vice-captain gets 1.5x points. So it is essential to pick the right players for these two crucial slots. With both teams studded with match-winners, selecting captain and vice-captain wouldn't be easy. However, below we'll look at the two players who have incredibly high chances of shinning at Motera. How to Buy India vs England 3rd Test 2021 Tickets: Price & Availability.

Although the Indian skipper hasn't got a big score lately, he has been playing substantial knocks regularly. Kohli has already scored two fifties in this series but would eye to reach three-figures at the Motera Cricket Stadium. Notably, the talismanic batsman scored a century in India's first Day-Night Test against Bangladesh. Hence, he knows how to tackle the pink ball, and one should pick him as the captain of your fantasy team.

The 38-year-old pacer is all set to come back in England's playing XI after getting rested for the second game. Anderson bowled a lethal match-winning spell in the first Test, and he would be licking his lips to operate with the pink ball. The legendary fast bowler also has a five-wicket haul in Day-Night Tests, and the Indian batsmen need to be at their prime to tackle him. All these factors make Anderson a potent vice-captain of your fantasy team.

(The above story first appeared on LatestLY on Feb 22, 2021 08:42 PM IST. For more news and updates on politics, world, sports, entertainment and lifestyle, log on to our website latestly.com).