It is time for the Asian arch-rivals to clash in a bid to gain bragging rights in T20 cricket. Both sides have tasted title glory in the competition earlier and another chapter is ready to be added to this illustrious age-old rivalry, on Sunday. 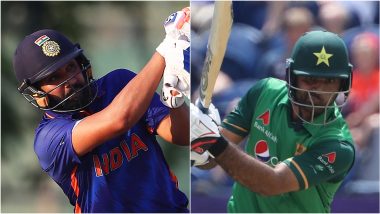 India and Pakistan are all set to collide in a blockbuster clash at the T20 World Cup 2021 Super 12. The match would be played at the Dubai International Stadium and would begin at 7:30 pm IST (Indian Standard Time). A lot has been said about the match and needless to say, it would be a high-octane clash with a lot of pressure and intensity. Pakistan have never beaten India in World Cups (both T20 and 50-overs) and the 2007 champions would aim at maintaining that record in this edition of the T20 World Cup as well. And they are looking good for a win as well. Virat Kohli's side took on England and Australia in their two warm-up games and won comfortably in both and the best part of it was that a lot of their batting got some time and deliveries to get into the groove and prepare themselves for the main draw. IND vs PAK Preview: Likely Playing XIs, Key Battles, Head to Head and Other Things You Need To Know About T20 World Cup 2021 Match 16

Pakistan on the other hand, did well to beat West Indies in their first warm-up fixture but lost to South Africa in their next practice match. Despite the loss, they would be happy to see Fakhar Zaman back in his destructive form and they would need him to do well against India if they have to register a first win over their arch-rivals on Sunday. Fans who are well-versed with making fantasy teams on Dream11 would know that the captain wins double the points while the vice-captain multiplies points x1.5 times. IND vs PAK, T20 World Cup 2021: Our Bowling Has Always Been Dominant, We Have Experienced Attack, Says Babar Azam

The Indian vice-captain would be one of the most important players to watch out for in this match. He did not play the first warm-up game but hit a stylish fifty in the second match against Australia and he looks to be in fine form, having had a poor IPL season. He had scored a hundred the last time these two sides met in the 2019 World Cup in England. The format and the venue might be different but he would aim to repeat that performance in Dubai on Sunday.

Fakhar Zaman's prominence as a destructive batsman grew after he slammed a hundred in the 2017 Champions Trophy final against India in a winning cause and ever since then, his performance has become a crucial factor in Pakistan's results against India. He looked in good form in the practice games and Zaman would hope that he could do well against India this time also, although the format and the scenario is different.

(The above story first appeared on LatestLY on Oct 23, 2021 08:42 PM IST. For more news and updates on politics, world, sports, entertainment and lifestyle, log on to our website latestly.com).