The Men in Blue, fielding a second-string side, almost pulled off a famous win but South Africa held their nerve to eke out a nine-run victory. With this result, South Africa have a 1-0 lead in the series. 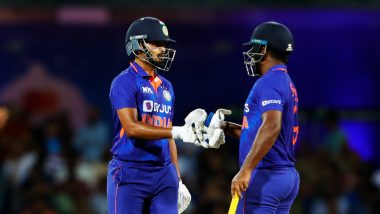 Sanju Samson pulled off a valiant effort but in the end, it was nine runs too many as South Africa clinched a hard-fought win over India in the 1st ODI 2022 . The result at the Bharat Ratna Shri Atal Bihari Vajpayee Ekana Cricket Stadium, Lucknow does put South Africa 1-0 up in the series but India can take heart from the way they fought back in the match after being reduced to 51/4 in 17.4 overs. Samson played his best ODI knock (86* off 63 deliveries) after Shreyas Iyer had led a counterattack with a 37-ball half-century. Shardul Thakur too did well with a 33-run knock coming off 31 balls but the spirited effort did not result in a win, with South Africa taking a 1-0 lead in the three-game affair. Kuldeep Yadav Bowls Aiden Markram With Gem of a Delivery During IND vs SA 1st ODI 2022 (Watch Video)

The match was shortened to 40 overs a side due to a long rain delay and South Africa, powered by fifties from David Miller and Heinrich Klaasen, put u 249/4 on the board. Chasing 250 to win, India did not get off to a good start with both openers--Shikhar Dhawan and Shubman Gill back in the hut in the sixth over with only eight runs on the board. Ruturaj Gaikwad (19 off 42 balls) and Ishan Kishan (20 runs from 37 deliveries) tried to arrest the slide but their effort did not pay dividends, both departing in quick succession.

Samson and Iyer then joined forces to fight back and were largely successful, with the latter going all guns blazing. He departed after his half-century but Samson then was later joined by Thakur, who did well for his 33. Samson changed gears as wickets kept falling at the other end and he was left to score 30 runs in the final over, a feat which he almost managed to pull off. For South Africa, Lungi Ngidi was the most successful bowler, having figures of 3/52. Kagiso Rabada snared two wickets while conceding 36 runs.

Earlier, Miller and Klaasen struck a 139-run stand to put South Africa in a strong position at 249/4 after the first innings. The Proteas got off to a cautious start but lost some quick wickets in the middle before the two got together to guide their side to a strong total.

#He also struck his highest ODI score against India (75*).

The focus of the series would now shift to the 2nd ODI, which would be played at the JSCA International Stadium Complex, Ranchi. South Africa would aim to seal a series win while India will eye a way to come back in the series, on Sunday, October 9.

(The above story first appeared on LatestLY on Oct 06, 2022 11:57 PM IST. For more news and updates on politics, world, sports, entertainment and lifestyle, log on to our website latestly.com).