The Indian A team players like Prithvi Shaw, Abhimanyu Easwaran, Rahul Chahar and others would aim to put up good performances in these games so that they can be in contention when the senior team tours the country later on. The second unofficial Test match would start from 1:30 pm IST. 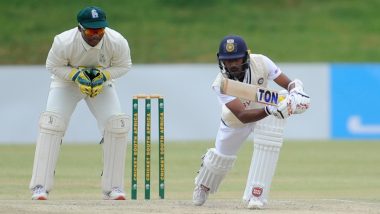 India A would take on South Africa A in the second unofficial Test of the three-match series, which starts from November 30, Tuesday. The match would be played at the Manguang Oval in Bloemfontein and is scheduled to begin at 1:30 pm IST (Indian Standard Time). The first Test match between both sides had ended in a draw due to bad weather and with two games to go, both teams would be eager on winning this contest and securing a series lead going into the last game. India had many performances to be happy about in the first unofficial Test, which included Abhimanyu Easwaran's hundred and captain Priyank Panchal's 96. The Indian bowling did well too with the likes of Navdeep Saini, Argan Nagswalla, Rahul Chahar and Umran Malik amongst the wickets.  India vs New Zealand 1st Test, 2021: Head Coach Rahul Dravid Lauds Ravichandran Ashwin After Spinner Achieves Record Milestone in Kanpur (Watch Video)

South Africa A would aim to continue in a similar fashion after their batters dominated in the first innings with captain Pieter Malan scoring 163 and Tony de Zorzi scoring 117. There were half-centuries from Jason Smith and Sinethemba Qeshile as well. India A's current tour is slated to go on despite the outbreak of the new COVID-19 variant Omricon in the African nations.

The four-day second unofficial Test match begins from November 30 onwards and ends on December 3. IND A vs SA A warm-up match will have a start time of 01:30 PM as per Indian Standard Time (IST).

IND A vs SA A 2nd Unofficial Test match won’t be available on TV even though Star Sports holds the broadcast rights of South African cricket in India.

(The above story first appeared on LatestLY on Nov 30, 2021 12:54 PM IST. For more news and updates on politics, world, sports, entertainment and lifestyle, log on to our website latestly.com).