Team India would like to confirm their place in the ICC World Test Championship (WTC) final in the fourth Test against England. The high-voltage encounter gets underway on Thursday (March 4) at the Narendra Modi Cricket Stadium in Ahmedabad. 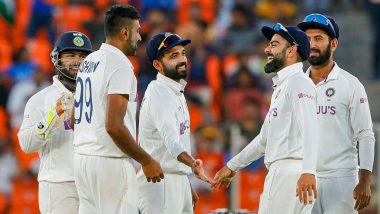 Team India would like to confirm their place in the ICC World Test Championship (WTC) final in the fourth Test against England. The high-voltage encounter gets underway on Thursday (March 4) at the Narendra Modi Cricket Stadium in Ahmedabad. Having an unassailable 2-1 lead, the home team can’t lose the series from here, but they still need a win or at least a draw in the last game to join New Zealand in the summit clash. Notably, Australia would qualify for the inaugural WTC final if England emerge victorious in the forthcoming Test. Hence, Virat Kohli’s men must put their best foot forward, and their first challenge would be fielding their best playing XI. IND vs ENG Dream11 Team Prediction: Tips To Pick Best Fantasy Playing XI for India vs England 4th Test 2021.

India must be on cloud nine after registering comprehensive victories in the second and third Test. However, they shouldn’t be complacent against the Joe Root-led side, which won the opening match emphatically by 227 runs. Moreover, the hosts will be without the services of their pace spearhead Jasprit Bumrah who pulled out of the last game, citing personal reasons. Hence, it would be interesting to see what combination India would opt for the crucial contest. As the match takes a countdown, let’s look at India’s likely playing XI. Virat Kohli, Rohit Sharma, Ajinkya Rahane & Others Gear Up for India vs England 4th Test 2021 in Ahmedabad (View Pics).

Openers: With 296 runs, Rohit Sharma has been India’s leading run-scorer this series, and the Hitman would like to continue his stellar form. While most of the batsmen failed to put the bat on the ball in the Day-Night Test, the dasher batted with precision and scored 66 and 25 (not out) in two innings, taking India to a 10-wicket triumph. Although Rohit’s opening partner Shubman Gill hasn’t fired after the first Test, he’s likely to retain his place owing to his previous records. Rohit Sharma ‘Wonders’ How Ahmedabad Pitch Will Behave, Hitman Makes Cheeky Instagram Post Ahead of IND vs ENG 4th Test 2021.

Middle-Order: With Cheteshwar Pujara, skipper Virat Kohli and Ajinkya Rahane in the ranks, India arguably have the strongest middle-order in Tests among all teams currently. However, the three talismans are yet to unleash their best in the series. All of them have played some significant knocks in the series but the three-figure mark is still elusive. Hence, it would be interesting to see who’ll shine in the vital game.

Wicket-Keeper: While Rishabh Pant’s batting prowess had already created a stir in the cricket world, his wicket-keeping has been impeccable in the current series. He has taken some brilliant catches against the fast bowlers, while his glovework on the spin-friendly tracks left fans in awe. Hence, only a last-minute injury can rule Pant out of the final fixture.

All-Rounders: Spin twins Axar Patel and Ravichandran Ashwin have been nothing short of a headache for England batsmen this series. The two spinners have hunted in tandem and rattled the visiting side’s batting order again and again. Not to forget, Patel and Ashwin can contribute with the bat as well. While the latter has already scored a century this series, Patel is yet to make a mark with the bat.

Bowlers: As mentioned above, Jasprit Bumrah has pulled out of the last Test, leaving a void in the line-up. Either Mohammed Siraj or Umesh Yadav is likely to replace him in the playing XI, depending upon their form in nets. A spinner would occupy the remaining spot. Washington Sundar played the last game but couldn’t make much mark. Hence, Kuldeep Yadav might replace him in the line-up with the track expected to be batting friendly.

(The above story first appeared on LatestLY on Mar 01, 2021 03:04 PM IST. For more news and updates on politics, world, sports, entertainment and lifestyle, log on to our website latestly.com).