India vs Australia 2nd ODI 2020: David Warner vs Mohammed Shami, Virat Kohli vs Adam Zampa and Other Exciting Mini Battles to Watch Out for in Rajkot 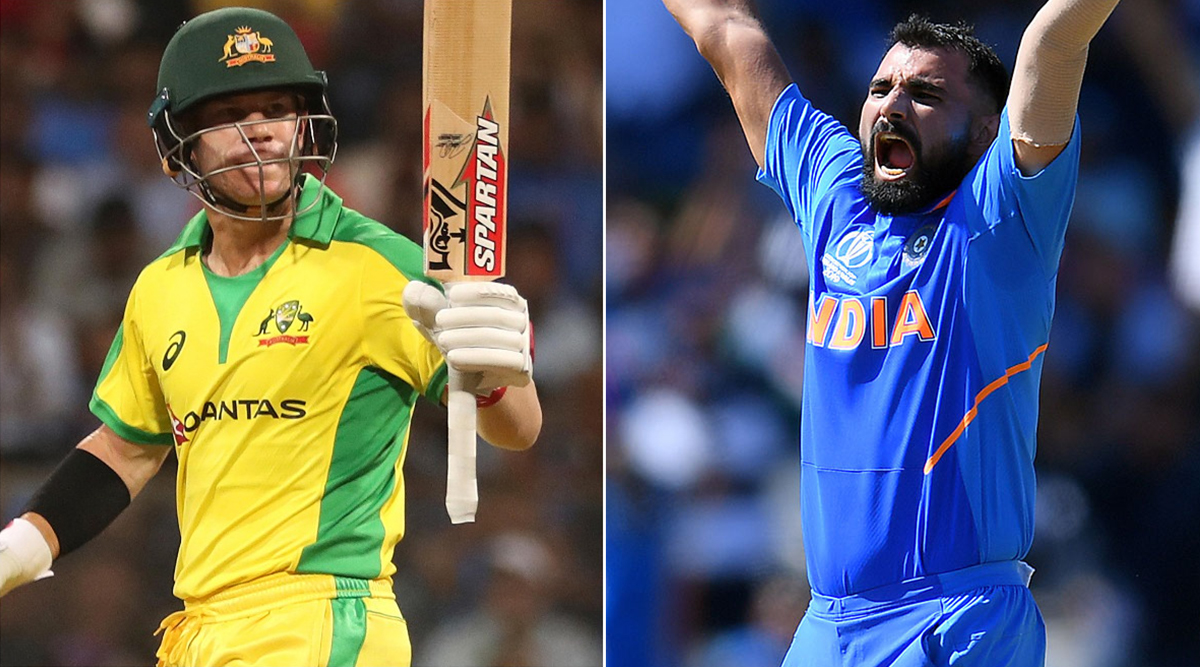 After facing a humiliating loss by 10 wickets in the first ODI, India will eye to make a scintillating comeback in the second ODI against Australia. The match will be played on January 17 at the Saurashtra Cricket Association Stadium in Rajkot. Trailing 0-1 in the three-match affair, It will be a do or die encounter for the home side and they must leave no stones unturned to come on top. On the other hand, Aaron Finch’s men will look to ride on the momentum and seal the deal in the next game. Well, stakes are really high in the next match and a great tussle between the bat and the ball is on the cards and below, we’ll look at some mini-battles which can be seen in Rajkot. India vs Australia, Cricket Score 2nd ODI Match.

In the opening game. Australia outplayed the home side in all three departments and registered a triumph by 10 wickets. The opening pair of skipper Aaron Finch and David Warner took the Men in Blue by storm as they both scored their respective centuries and chased the target of 256 runs without breaking a sweat. In the bowling too, the visitors were spot on as the likes of Virat Kohli and Rohit Sharma were dismissed cheaply and India were bundled out for 255 runs. Meanwhile, let’s look at some individual clashes which can enhance the thrill of the encounter in the second ODI.

The lone warrior of India’s batting in the previous clash was Shikhar Dhawan who scored 74 runs and was the only Indian to score a fifty. Riding on his good form, the opener will seek to register an even more significant score in Rajkot. However, the thunderbolts from Mitchell Starc will not make life easy for the southpaw and it will interesting to see how these two will fare in the second ODI.

The swashbuckling Aussie opener broke a flurry of records in the last game and his mayhem might still be giving nightmares to the Indian bowlers. Mohammed Shami, however, will seek redemption in the next game and must be looking to breach Warner’s defences as soon as possible. The pacer was also highest ODI wicket-taker in 2019 and is very well able to turn the tables around.

The Indian skipper was certainly exasperated after giving a return catch to Zampa in the first ODI and will not want to put a foot wrong in the next game. Coming to bat at number four, the number one ranked ODI batsman is likely to face Zampa early in his innings and will aim to dominate him this time around. The leg-spinner, on the other hand, will again want to spin his web in order to get the better of Kohli one more time.

It was Australia only who last defeated India at their own fortress in 2019 and are looking all set to replicate the history again. They are just one win away from clinching the series and will eye to again put up a similar show in the next game. Virat Kohli and Co, on the other hand, will not want to disappoint their home crowd again and will step up to settle the scores in the second ODI.