India vs England 3rd ODI 2021 Preview: Likely Playing XIs, Key Battles, Head to Head and Other Things You Need To Know About IND vs ENG Cricket Match in Pune

After failing to chase 318 in the opening game, England hunted down 337 in just 43.3 overs to level the ODI series. Jonny Bairstow struck a century while Ben Stokes smashed 99 and their partnership of 175 runs took England closer to home before Dawid Malan and Liam Livingstone completed the chase with an unbeaten fifty-run stand. 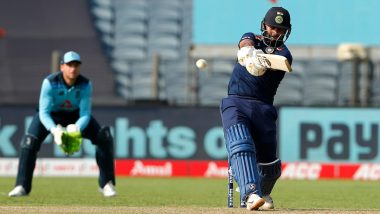 Virat Kohli’s men will look for a swift return into winning again when they host England in the third and final match of the three-game ODI series. India vs England 3rd ODI will be played on March 28 (Sunday) at the Maharashtra Cricket Association Stadium in Pune. India started the series in style after beating England by 66 runs in the series opener. But the visitors roared back and levelled the series with a six-wicket win in the second instalment of the three-match ODI series. Ahead of the IND vs ENG 3rd ODI match, take a look at the match preview, head-to-head records, key players, mini-battles and likely playing XIs of both teams. Yuzvendra Chahal, Suryakumar Yadav and Washington Sundar! Fan Decodes Wasim Jaffer’s Message for Virat Kohli To Pick the Indian Playing XI for 3rd ODI.

After failing to chase 318 in the opening game, England hunted down 337 in just 43.3 overs to level the ODI series. Jonny Bairstow struck a century while Ben Stokes smashed 99 and their partnership of 175 runs took England closer to home before Dawid Malan and Liam Livingstone completed the chase with an unbeaten fifty-run stand between them. They were off to a great start with Bairstow and Jason Roy stitching 110 for the opening wicket before the latter was run out shortly after completing his half-century. England had suffered a massive collapse from a similar stage last game but this time Bairstow and Stokes snatched the game away from India with a 175-run stand in less than 19 overs. IND vs ENG Dream11 Team Prediction: Tips To Pick Best Fantasy Playing XI for India vs England 3rd ODI 2021.

India and England have met each other 102 times in One-day internationals. The hosts lead the head-to-head records with 54 victories while England won 43 matches. Two other games have ended in a tie while three matches produced no result.

KL Rahul is India’s highest runscorer in the series. After hitting 64 in the first match, Rahul scored a hundred in the second game. In both matches, he gave India the end flourish they required. Rishabh Pant smashed England all-around the park in his first ODI outing in a long time. He will also be key for India. For England, Bairstow missed on a century in the opening game by just six runs but scored a century in the next. He and Ben Stokes, who smashed 99 in the last match, will be the key players for England.

Adil Rashid once again dismissed Virat Kohli. This was the ninth time in international cricket that Rashid dismissed Kohli. Their mini-battle is the one to look out for.

India vs England 3rd ODI match will be played at the Maharashtra Cricket Association Stadium in Pune.

The 3rd ODI between India and England is scheduled to begin at 01:30 pm IST (Indian Standard Time). Toss will be held at 01:00 pm Indian Time.

Star Sports will live telecast the India vs England 3rd ODI match. Star Network is the official broadcaster for England’s tour of India 2021 and will be live telecasting the match on TV in India. Star’s OTT platform, Disney+Hotstar will be live streaming the game online for the fans.

(The above story first appeared on LatestLY on Mar 27, 2021 01:31 PM IST. For more news and updates on politics, world, sports, entertainment and lifestyle, log on to our website latestly.com).