Skipper Kohli then stitched a 102-run stand with Iyer and steadied India's ship. The Indian captain looked all set to score yet another century but was undone by a brilliant googly from Ish Sodhi and was bowled after scoring 51. 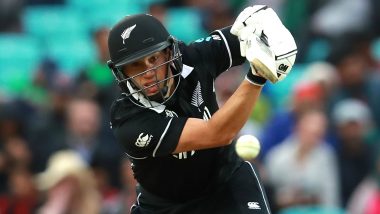 Hamilton, February 5: After coming close on three occasions to beat India in the ongoing tour, New Zealand were finally able to cross the line and taste victory as they defeated the Men in Blue by four wickets in the first ODI at the Seddon Park on Wednesday. Seasoned campaigner Ross Taylor anchored New Zealand's chase of 348 by scoring a brilliant hundred. He was well supported by Henry Nicholls and stand-in captain Tom Latham as the hosts took a 1-0 lead in the three-match series.

The Black Caps started off the chase on a cautious note as both Martin Guptill and Nicholls played with intent. Such was the determination from Guptill (32) that he scored just two boundaries in 41 balls before getting out to Shardul Thakur on the team score of 85. India vs New Zealand Highlights 1st ODI 2020: Ross Taylor Guides Kiwis to Record Chase.

Debutant Tom Blundell, who came in first down, didn't have a great outing and was stumped by K.L. Rahul at his individual score of 9. At that point of time, the match appeared to be heading in India's favour.

However, it was then that Taylor brought in all his experience and alongwith Nicholls shared a 62-run stand. After Nicholls' dismissal who was sent back to the pavilion courtesy some brilliant fielding efforts from Virat Kohli, Latham joined forces with Taylor and steered the team towards victory.

The match did seem to once again turn towards India as New Zealand lost two wickets in quick succession and brought the crowd to the edge of the seats. However Mitchell Santner smashed two boundaries in Thakur's 48th over and erased hopes of any upset. Taylor -- who scored his 21st ODI century -- collected the winning runs as he remained unbeaten on 109 alongside Santner who scored 12 not out and guided New Zealand to what is their most famous win in recent times.

Earlier, India rode on a brilliant century from Shreyas Iyer and fifties from Rahul and Kohli as they posted a formidable 348-run target. After being put into bat, debutants Prithvi Shaw and Mayank Agarwal provided India with a steady start. They initially faced some tough time, but managed to get through that and stitched a 50-run stand.

However, both failed to capitalise on their starts as they got out in successive overs. While Shaw (20) was the first to go as he got a peach of a delivery from Colin de Grandhomme, Agarwal tried to be over aggressive and in the process gifted his wicket to Tim Southee after contributing with 32.

Skipper Kohli then stitched a 102-run stand with Iyer and steadied India's ship. The Indian captain looked all set to score yet another century but was undone by a brilliant googly from Ish Sodhi and was bowled after scoring 51.

Rahul, who has been in the form of his life on the ongoing tour, continued from where he left in the T20Is, and made sure runs come thick and fast for the visitors. He shared a 136-run partnership with Iyer before the latter got out after playing a brilliant knock of 103.

However, the dismissal didn't deter the confidence of Rahul who continued with his prolific form and switched gears to take India past the 300-run mark. He was well supported by Kedar Jadhav, who played a nice cameo and took the New Zealand bowlers to the cleaners. Ross Taylor Records His 21st ODI Century in India vs New Zealand 1st ODI 2020.

The two teams will now face off in the second ODI at the Eden Park on Saturday.

(The above story first appeared on LatestLY on Feb 05, 2020 04:16 PM IST. For more news and updates on politics, world, sports, entertainment and lifestyle, log on to our website latestly.com).