The Indian bowlers had a poor day on the field in the 1st ODI with New Zealand's Tom Latham starring for his team with a 145-run undefeated knock. Check live streaming and telecast details of the match, below. 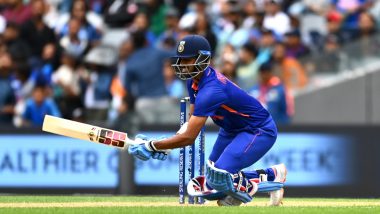 Following a disappointing start to the three-match series, team India (IND) will seek revenge at Seddon Park Hamilton when they face New Zealand in second ODI on Sunday, 27 November. In the first ODI, visitors were pushed against the wall by the stunning 221-run stand for the fifth wicket between New Zealand skipper Kane Williamson and Tom Latham while chasing a 307-run target. Latham punished Indian bowlers across all sides of the ground after smashing his career-best knock of 145 runs which came off just 104 balls. From the other side, Williamson kept his cool to complement Latham to lead his side to an invincible seven-wicket victory. India vs New Zealand 2nd ODI 2022 Preview: Likely Playing XIs, Key Players, H2H and Other Things You Need to Know About IND vs NZ Cricket Match in Hamilton

Leading a young contingent, Shikhar Dhawan started from the front after hitting 72 off 77 accompanied by Shubman Gill who scored 50 off 65. Later, Shreyas Iyer continued the task by adding a valuable 80 off 76 despite being troubled by the short balls intermittently. Washington Sundar gave a final touch by pulling off a 37-run cameo from just 16 balls. Despite 306 runs on the board, what failed India was the bowling. Arshdeep Singh and Shardul Thakur remained wicketless and conceded runs at an economy of 8.33 and 7.00. Debutant Umran Malik did give a tough time to New Zealand batters with his pace and also scalped two early wickets.

The bowling has been a trouble for India and most likely some changes might be expected in the second ODI. Deepak Chahar could possibly replace Yuzvendra Chahal. To play the decider on 30 November, team India will bounce back significantly to tie the series in the second ODI.

When is India vs New Zealand 2nd ODI 2022? Know Date, Time and Venue

India vs New Zealand 2nd ODI will be played at the Seddon Park in Hamilton on November 27, 2022 (Sunday). The IND vs NZ cricket match has a scheduled start time of 07:00 am IST (Indian Standard Time). India vs New Zealand, 2nd ODI 2022, Hamilton Weather Report: Check Out the Rain Forecast and Pitch Report at Seddon Park

Where To Watch Live Telecast India vs New Zealand 2nd ODI 2022 on TV?

IND vs NZ 2022 ODI series in India will be broadcast officially by Amazon Prime Video. However, fans will be able to watch the India vs New Zealand 2nd ODI match on TV. Unlike the T20I series, DD Sports will provide the live telecast of the match not only on DTT platforms like DD Free Dish but DTH platforms like Airtel Digital TV, TATA Play, Videocon D2H and DishTV as well.

How To Get Free Online Live Streaming Of India vs New Zealand 2nd ODI 2022?

Fans will be able to watch the India vs New Zealand 2nd ODI 2022 on online platforms as Amazon Prime are the official broadcaster of the series. Fans will need to get Amazon Prime subscription to catch the action live. With a perfect combination of batters, bowlers and all-rounders, New Zealand will possibly avoid any change in the playing XI and focus on winning the second match to grab the series in advance.

(The above story first appeared on LatestLY on Nov 27, 2022 05:30 AM IST. For more news and updates on politics, world, sports, entertainment and lifestyle, log on to our website latestly.com).