After the first Test was washed out without a ball being bowled, Doull blew away India in the second. In the third, Dravid became the third Indian to score two hundreds in a Test match. 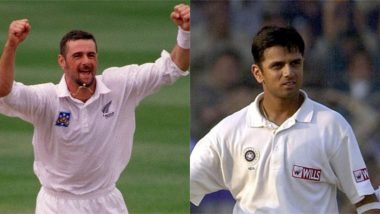 India’s 1998/99 tour of New Zealand was reduced to a two-Test series after the first Test match, at Dunedin, was washed out without a ball being bowled. New Zealand won a hard-fought match at Wellington before the sides played out a draw in the decider, at Hamilton.

New Zealand won a crucial toss at Wellington. On a green pitch under an overcast sky, Simon Doull (7-65) reduced India to 16/4. Sachin Tendulkar (47) and Mohammad Azharuddin (103*) then added 83, but India collapsed again once Doull returned to take out Tendulkar. In fact, Doull took the first seven wickets in the Indian innings of 208. India vs New Zealand Part 11, 1995/96: India Win Damp Squib.

Cairns’ 126 helped New Zealand declare on the last day. There was just enough time left for Dravid (103*) and Sourav Ganguly (101*) to get their respective hundreds. Dravid became the third Indian to score two hundreds in the same Test match.

(The above story first appeared on LatestLY on Jun 21, 2021 06:23 PM IST. For more news and updates on politics, world, sports, entertainment and lifestyle, log on to our website latestly.com).