IPL 2020 Captains List: From MS Dhoni to Virat Kohli, Check Out Skippers of All 8 Teams in Indian Premier League 13 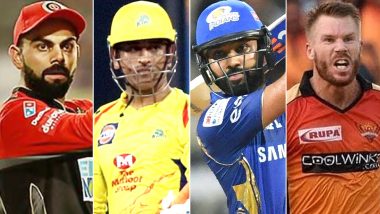 Cricket fans all over the world are counting days as the 2020 edition of the Indian Premier League (IPL) is set to get underway on September 19. The marquee tournament is even more significant this time as many prominent players will take the field again after a long Coronavirus-induced break. Also, due to the COVID-19 crisis in India, IPL 2020 will take place in UAE this time with Dubai, Abu Dhabi and Sharjah being the three venues. The pitches in UAE are known to favour the spinners and the boundaries are also on the larger side. Hence, all the sides will have to tackle a different challenge. The skippers of all the teams will also have to be at their prime in order to guide their side to the prestigious title. So, as IPL 2020 takes a countdown, let’s look at the captain of all the eight teams. IPL 2020: Check out Full List of Coaches & Support Staff of all Eight Teams.

Dhoni fans are eagerly waiting for IPL 2020 as the talismanic wicket-keeper batsman will take the field after more than one year. The CSK skipper hasn’t played a professional game since the 2019 World Cup and his comeback is awaited by one and all. Well, the legendary cricketer, who has three IPL titles under his belt, also must be determined to make a mark and guide the Yellow to yet another trophy. IPL 2020: Mumbai Indians Decides to Put Team in a Hotel.

Kohli is unarguably one of the best batsmen to have ever stepped onto the cricket field and his IPL record is tremendous too. With 5412 runs, in fact, the 31-year-old is the highest run-scorer in the tournament’s history. However, he hasn’t been able to guide RCB to the title even once and will aim to break the jinx in UAE.

With four IPL titles under his belt, Rohit is the most successful captain in IPL history. Hailed as Hitman, the veteran has also been a nemesis for many prominent bowling line-ups over the years. Hence, opposition teams must have to find a way to restrict Rohit Sharma or else one will see the defending champions lifting their fifth title.

The Australian southpaw entertained one and all with his TikTok videos during the lockdown. However, it will be interesting to see what his bat can do. Warner, who is the only batsman with three orange caps, has guided Hyderabad to the title in 2016 and will not mind doing it once again. Notably, he will replace Kane Williamson as SRH skipper and will have to come good in order to justify the franchise’s decision.

The swashbuckling batsman enjoyed a sensational run in white-ball cricket in the past year and will aim to guide KXIP to their maiden title. With Ravichandran Ashwin going to Delhi Capitals, the right-handed batsman will lead in IPL for the first time and it will be interesting to see if he can rise to the occasion or not.

Just like his KXIP counterpart, Shreyas Iyer has also taken giant strides in the past year. Many reckon that the right-handed batsman has solved India’s number 4 woes in limited-overs cricket. However, Iyer still has to get his hands on the IPL title. Under his leadership, DC at the sixth position last year and will like to win the trophy this time.

With Ajinkya Rahane gone to Delhi Capitals, Smith’s role becomes even more significant. After clinching the inaugural edition of the tournament in 2008, Rajasthan haven’t won the title but will like to get one in the forthcoming tournament. Smith, however, will have the services of Ben Stokes and Jos Buttler who are one of the best in the business. Also, it will be interesting to see his camaraderie with Jofra Archer as the duo had a great battle in Ashes 2019.

The veteran wicket-keeper batsman hasn’t been around the Indian team since the 2019 World Cup but will eye to make a mark in IPL 2020. His performance for Kolkata has been impressive in the last two seasons and he must be determined to showcase his blitzes again. Also, with the addition of England’s World Cup-winning captain Eoin Morgan, Karthik will certainly get some help while making strategies and decision

Players of all the teams will be put in six days quarantine upon their arrival in UAE. As per reports, all teams must reach the base by the second or third week of August. However, with rules and norms of the game being altered due to the global health scare, it will be interesting to see how quick the players will adapt the conditions.

(The above story first appeared on LatestLY on Aug 07, 2020 07:15 PM IST. For more news and updates on politics, world, sports, entertainment and lifestyle, log on to our website latestly.com).