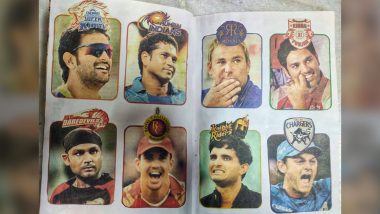 The announcement of IPL 2020 taking place has excited all fans. With ICC Postponing the ICC T20 World Cup 2020 tournament by one year, BCCI have been given an entire three-month window to stage the 13th edition of the Indian Premier League. IPL franchise Chennai Super Kings (CSK) recently took to Instagram to share an interesting montage of some superstars from the previous editions of the franchise league. CSK shared a lovely collection of images of former IPL captains, which included MS Dhoni, Sachin Tendulkar, Yuvraj Singh and other captains of the 2009 edition of the tournament. Cut-out images of all eight captains with their team logos were arranged in a snapshot by an IPL fan. MS Dhoni Retirement: Will Chennai Super Kings Captain Retire After IPL 2020?

All cricketers in that montage were captains for their respective IP franchises expect for Ganguly, who was replaced by Brendon McCullum as the captain of KKR for the 2009 edition of the tournament.

Deccan Chargers were the IPL champions that season with Adam Gilchrist leading his charges to their maiden IPL trophy. Chargers beat Royal Challengers Bangalore (RCB) by six runs to win the title in 2009. Gilchrist finished the tournament as the second-highest run-getter while fellow Deccan Chargers teammate RP Singh finished as the highest wicket-taker.

(The above story first appeared on LatestLY on Jul 25, 2020 06:52 PM IST. For more news and updates on politics, world, sports, entertainment and lifestyle, log on to our website latestly.com).