Coming to bat at number eight against Delhi Capitals, Chris Morris, who bagged a staggering INR 16.25 crore in this year's auction, had a daunting task at hand, with Royals needing 58 off mere 31 deliveries. However, a cucumber-cool Morris smashed four massive sixes in the final two overs to take the game away from Delhi's grasp. 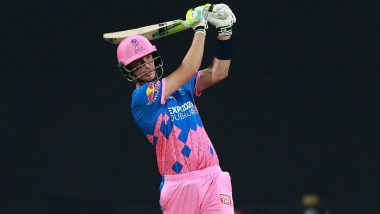 Rajasthan Royals' million-dollar baby Chris Morris justified his massive price tag after starring in his side's three-wicket triumph over Delhi Capitals in VIVO Indian Premier League (IPL) 2021. Coming to bat at number eight, the South African all-rounder, who bagged a staggering INR 16.25 crore in this year's auction, had a daunting task at hand, with Royals needing 58 off mere 31 deliveries. However, a cucumber-cool Morris smashed four massive sixes in the final two overs to take the game away from Delhi's grasp. He, in total, scored 36 off 18 deliveries as the Men in Pink won the game with two balls to spare. While the cricket fraternity hailed Morris' blitzes, several fans also went to April 12 when RR skipper Sanju Samson denied the Proteas star a controversial single against Punjab Kings. IPL 2021 Points Table Updated.

It was Rajasthan's first game in IPL 2021, and the KL Rahul-led Punjab Kings asked them to chase 222 runs at the Wankhede Stadium in Mumbai. Samson led Rajasthan's chase brilliantly and even notched up a sensational century in his maiden captaincy assignment in IPL. However, a controversy occurred when RR needed five runs off the final two balls. Samson, the on-strike batsman, smashed the penultimate ball to the cover region and his batting partner Morris ran for a single. However, the RR skipper had different plans as he denied running and the Proteas dasher had to run to the non-striker's end midway. RR vs DC Stat Highlights IPL 2021: David Miller, Chris Morris Shine As Rajasthan Royals Produce Brilliant Comeback.

Samson, trying to smash a six in the final ball, eventually got out, and Punjab won the thriller. Hence, as Morris's sensational hitting guided Rajasthan to over Delhi, many fans opined RR would have had a better chance of defeating Punjab if Samson had run in the penultimate ball. Reacting to the same after Royals' victory over Capitals, Morris defended his captain, saying that the latter was in sublime hitting form.

Meanwhile, the Men in Pink climbed to the fifth spot in IPL 2021 after their last-night win. However, they shouldn't be complacent, especially after Ben Stokes getting ruled out of the entire season with a broken hand. Moreover, Jofra Archer is likely to miss some more games in the tournament. Hence,   Sanju Samson's troop will next face MS Dhoni's Chennai Super Kings at the same Mumbai Stadium on April 19.

(The above story first appeared on LatestLY on Apr 16, 2021 08:59 AM IST. For more news and updates on politics, world, sports, entertainment and lifestyle, log on to our website latestly.com).