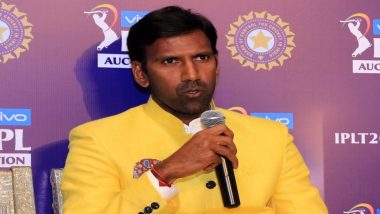 An official on the condition of anonymity said that Balaji was in the dug-out and has obviously interacted with the Mumbai Indians players too. "Now you can test every day but just like KKR's match has been postponed, it's prudent if MI's match against SunRisers Hyderabad on Tuesday and CSK's game against Rajasthan Royals on Wednesday is rescheduled," said the official.

However, there has been no confirmation from the BCCI's end about the confirmation of games in Delhi getting rescheduled. A while ago it was reported that the BCCI has asked team Delhi Capitals to isolate themselves as they played against the Kolkata Knight Riders on April 29, 2021. The match between Kolkata Knight Riders and Royal Challengers Bangalore which was supposed to be held on Monday, May 3rd 2021, has been rescheduled. There is still no clarity about the new dates for KKR vs RCB.

(The above story first appeared on LatestLY on May 03, 2021 10:07 PM IST. For more news and updates on politics, world, sports, entertainment and lifestyle, log on to our website latestly.com).