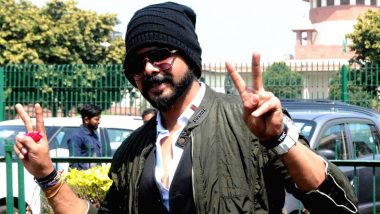 Indian pacer is set for a return to cricketing action after serving a seven-year ban for his alleged involvement in IPL spot-fixing in 2013.  With the cricketer’s suspension ending in September, he has been tipped to play for Kerala in this year’s Ranji Trophy if he proves his match-fitness. The Kerala-born bowler is also looking to make a return to the Indian Premier League if his performances are up to the mark. Sreesanth Could Be Included in Kerala’s Ranji Team, Netizens Excited to See World Cup Winner Back in Action (See Reactions).

‘I will put my name for sure if I am performing well, which I think I will’ said the 37-year-old during an interview with PTI. ‘There are teams which will be interested and I have always told myself that I will again play IPL. That's where I was thrown out and I will make sure I am back on that platform, win matches’ he added. Sreesanth Says 'Would Like to Play 2021 Test Championships Final if India Plays in It'.

‘The only place through which I can give an answer (to the corruption charges) is through IPL even if I play for India. I want to face the fear and that's the only way to live life. Most of my fear was about what would people say when I play my next cricket match. I am sure all those people will realise what I went through and who are behind it,’ he added.

The right-arm pacer has played for three franchises in the cash-rich league. While representing the likes of Kings XI Punjab, Kochi Tuskers Kerala and Rajasthan Royals he has taken a total of 40 wickets in 44 games.

The pacer is leaving no stones unturned for his comeback as he has been training with famed NBA physical and mental training coach Tim Grover, who has worked with the likes of Michael Jordan and Kobe Bryant. The 37-year-old recently said that he would like to play for India at the 2021 Test Championships.

(The above story first appeared on LatestLY on Jun 22, 2020 12:45 PM IST. For more news and updates on politics, world, sports, entertainment and lifestyle, log on to our website latestly.com).