A lot has been said about the Chennai pitch, which hosted the second India vs England Test. The Chepauk track favoured the spinners right from the first day, and Virat Kohli’s men eventually won the game by 317 runs. England’s dismal show ignited a massive debate among the cricket fraternity, with several fans and experts, slamming the pitch conditions. 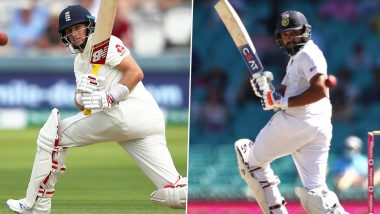 A lot has been said about the Chennai pitch, which hosted the second India vs England Test. The Chepauk track favoured the spinners right from the first day, and Virat Kohli’s men eventually won the game by 317 runs. England’s dismal show ignited a massive debate among the cricket fraternity, with several fans and experts, including Kevin Pietersen and Michael Vaughan, slamming the pitch conditions. Speaking on the topic, Indian opener Rohit Sharma said that every team takes home advantage and Team India also have rights have the right to prepare pitches as per desire. While Rohit’s remarks didn’t go down well with several fans, England captain Joe Root has backed his statement. India vs England Day-Night Test 2021: At What Time the Pink Ball Test Starts at Motera Cricket Stadium in Ahmedabad?

"When we go out other countries don't think about us, so why should we think about others. We should make pitches according to the preference of our team. This is what it means home and away advantage, otherwise, this should be taken out. Tell ICC to make a rule that pitches should be prepared the same everywhere," Rohit had said in a virtual press conference. How to Watch India vs England 3rd Test 2021 Live Streaming Online on Disney+ Hotstar?

On being asked to comment on the Indian cricketer’s comment, Root backed Rohit’s stance and said that every team deserves to take home advantage. "Everyone deserves home advantage, I do believe that. Wherever you go in the world, it's going to be difficult and I quite like that. It's one of the intricacies of Test cricket and makes it such a beautiful game. You're going to have to have a well-rounded squad of players," Root was quoted as saying by ESPNCricinfo.

Speaking of the highly-debated Chennai track, Root admitted that the pitch wasn’t ‘brilliant’ but his side also accepted that England were outplayed by the home team. "In terms of last week, I don't think it was a brilliant pitch but I don't think we deserved to win, either. I don't think the toss determined it. If we're going to become the No. 1 side in the world, we're going to have to manage that better," Root added.

Meanwhile, the four-match series is currently poised at 1-1 after the first two games and the third match, a Day-Night Test, gets underway on February 24 (Wednesday) at the newly-inaugurated Motera Cricket Stadium in Ahmedabad. Stakes are incredibly high in the contest as the winner would take an unassailable 2-1 lead whereas the loser would get knocked out of the ICC World Test Championship final race.

(The above story first appeared on LatestLY on Feb 23, 2021 04:36 PM IST. For more news and updates on politics, world, sports, entertainment and lifestyle, log on to our website latestly.com).