There would be a lot of expectations from Karachi Kings this time around, especially with a star player like Babar Azam at the helm. This franchise shows a lot of promise in going all the way this year. 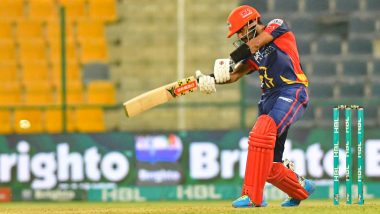 Boasting some serious talent in their ranks, Karachi Kings would have their eyes firmly fixed on the prize when they open their campaign in the Pakistan Super League 2022 on January 27, Thursday. The franchise would have Pakistan's star cricketer Babar Azam lead them in the competition this year. Azam, who also captains the national team across formats, has had a meteoric rise in stature as an international star, recently being crowned the ICC Men's ODI Cricketer of the Year for 2021. Karachi Kings had managed to make it to the playoffs with a superior net run rate last season but their campaign ended at the hands of Peshawar Zalmi, who won the Eliminator by a narrow margin. As the new season of the Pakistan Super League gets set to kick off, let us have a look at the squad as well as the schedule for Karachi Kings. Pakistan Super League 2022 Schedule, Free PDF Download Online: Get PSL 7 Fixtures, Time Table With Match Timings and Venue Details.

Azam, without a shadow of a doubt, would be a very important player for the franchise. He would look to be the core of his side's batting unit as Karachi Kings eye a second PSL title in their history after winning it in 2020. Besides him, the franchise also has some power-packed performers like former captain Imad Wasim, Afghanistan all-rounder Mohammad Nabi, Mohammad Amir and also England's T20 specialist Chris Jordan. On the bowling front, Amir is expected to lead the attack and this time around, they would want to focus slightly more on not conceding too many runs in the powerplay. Batting remains their main area of strength, with Azam being given company by Joe Clarke, Sharjeel Khan and also Nabi, all of who can surely hit the ball a long long way.

(The above story first appeared on LatestLY on Jan 25, 2022 12:18 PM IST. For more news and updates on politics, world, sports, entertainment and lifestyle, log on to our website latestly.com).