Chasing a challenging total of 168 runs, Shane Watson got CSK off to a flying start. With 78 runs needing of the last ten overs and nine wickets in hand, Chennai’s victory looked inevitable. However, Sunil Narine and Varun Chakravarthy spun their web and ran through CSK’s middle order. 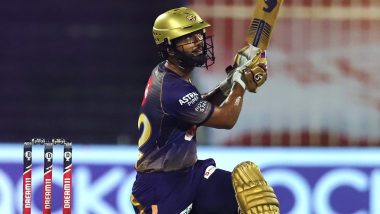 Earlier in the game, KKR won the toss and elected to bat at the Sheikh Zayed Stadium in Abu Dhabi. Though, Kolkata named the same playing XI from the last game, Rahul Tripathi replaced Sunil Narine in the opening slot, and the move paid off immediately. He scored 81 runs off 51 deliveries and set an excellent platform for late flourish. However, just like CSK, KKR also lost momentum in the latter half as Kolkata got bundled out for 167 runs which eventually proved to be enough. Birthday boy Dwayne Bravo was the pick of Chennai bowlers, taking three wickets. Meanwhile, let’s look at the stat highlights of the game. KKR vs CSK Highlights Dream11 IPL 2020.

# Rahul Tripathi smashes his first fifty of the season.

With this KKR have advanced to the third position in the team standings and are in a comfortable place. They will next meet Kings XI Punjab in Abu Dhabi on October 10. On the other hand, CSK need to win majority of their upcoming games to stay in the playoff race. Their next assignment will get underway against Virat Kohli’s Royal Challengers Bangalore at the Dubai International Cricket Stadium.

(The above story first appeared on LatestLY on Oct 08, 2020 12:13 AM IST. For more news and updates on politics, world, sports, entertainment and lifestyle, log on to our website latestly.com).