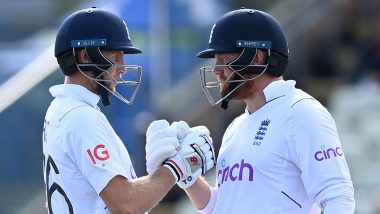 A Test match is the epitome of cricket as it not only tests the patience of a cricketer but also brings out the best out of the player. There is a saying- the more you wait the more you gain. The most entertaining part of a Test match is chasing a target to win the game like England Cricket team did at Edgbaston in the fifth Test against India. The visitors (416 all out in 1st innings & 245 all out in 2nd innings) set a target of 378 runs for the hosts to chase. England chased down the target with seven wickets in hand to win the fifth Test and level the series 2-2. With this, England recorded the eighth highest run-chase in the history of Test cricket.  What is BazBall? Know All About England’s New Approach to Test Cricket Under Coach Brendon McCullum

West Indies hold the record of chasing the highest total in the second innings of a Test match. The Windies scored 418 runs against Australia in 2003 at Antigua. South Africa are the second in recording highest successful run chase as they chased down 414-run against Australia at Perth Test. Australia chased down 404 runs against England in 1948. Indian Cricket Team hold the fourth position in the highest run chasing history of Test cricket. They scored 406 in the second innings to beat the mighty Windies in 1976 after being set 403. The other teams, who secured a place in the top-10 highest run chase in Test cricket, are Sri Lanka and Pakistan, chasing more than 350 runs successfully. Here at Latestly we have a look at the 10 highest successful run chases in Test Cricket, which now features England's 378 against India.

Meanwhile, England moved to the eight position on the highest successful run chase in Test cricket history list after derailing Pakistan's record. Joe Root and Jonny Bairstow stitched a record partnership of unbeaten 369 runs to set up a record win for England. Root and Bairstow finished unbeaten on 142 and 114 respectively.

(The above story first appeared on LatestLY on Jul 05, 2022 04:18 PM IST. For more news and updates on politics, world, sports, entertainment and lifestyle, log on to our website latestly.com).