Both teams are locked on eight points each and a win would be on the minds of both KL Rahul and Mumbai Indians today. Mumbai Indians would be eager to break their three-match losing streak while Punjab Kings would be confident, after snatching a five-run win in their last match. 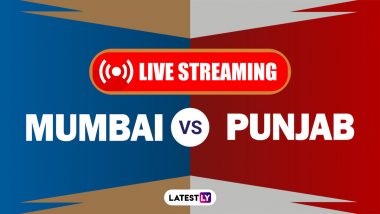 Mumbai Indians aim to resurrect their struggling campaign when they face Punjab Kings in an important clash in IPL 2021 on Wednesday, September 28. The match would be played at the Sheikh Zayed Cricket Stadium and would start at 7:30 pm IST (Indian Standard Time). Mumbai Indians have not been even a shadow of themselves in the UAE leg of IPL 2021. They had Chennai well under control in their first match since IPL resumed on September 19 but failed to capitalise on that and ended up losing the clash. Next, they were taken apart by Kolkata Knight Riders in their next match and subsequently, a defeat by Royal Challengers Bangalore followed. MI vs PBKS Preview: Likely Playing XIs, Key Battles, Head to Head and Other Things You Need To Know About VIVO IPL 2021 Match 42

They had begun the second phase of IPL 2021 in the first half of the table and now, they have dropped down to seventh and are in need of a win to get things rolling once again. Not just one but they actually need to win all their remaining matches to make it through to the playoffs. Punjab Kings on the other hand, started with a demoralising two-run loss but bounced back by defending a low total against Sunrisers Hyderabad. Now, they too have eight points like Mumbai Indians and would need a win to bolster their hopes of making the playoffs. MI vs PBKS, Abu Dhabi Weather, Rain Forecast and Pitch Report

Those unable to watch the MI vs PBKS match live on television can follow the game online. Disney+Hotstar will be live streaming the Mumbai Indians vs Punjab Kings match online for its fans in India. Fans, however, need to subscribe to Hotstar by paying a nominal subscription fee. JIO currently is also providing Hotstar subscriptions on select plans.

(The above story first appeared on LatestLY on Sep 28, 2021 04:43 PM IST. For more news and updates on politics, world, sports, entertainment and lifestyle, log on to our website latestly.com).