Most Ducks in IPL: From Rohit Sharma to Ajinkya Rahane, Five Cricketers Who Have Been Dismissed on Nought Most Number of Times

The IPL have always been a fair battle between bat and ball with bowlers and batsmen. Sometimes the bowlers have drifted away and have gone for plenty while on occasions the batsmen have faltered and been dismissed. On days the bowlers have the final laugh, batsmen are often dismissed for ducks. There have been plenty of such instances in the IPL. 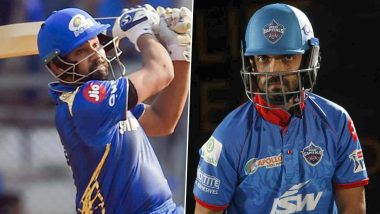 The IPL have grown to be one of the most competitive and lucrative T20 leagues around the world. Since Brendon McCullum kicked off the Indian Premier League with an audacious 158 in the opening match of the tournament, the IPL have witnessed some ludicrous hitting at astonishing strike rates. But along the way, there have plenty of failures like batsmen struggling to bat the ball or getting out for ducks. Some of the most successful batsmen in the IPL history have been dismissed for ducks a record number of times. Ahead of IPL 2021, let us take a look at cricketers with most ducks in the IPL. Biggest Wins in IPL: Five Largest Victory Margins in History of Indian Premier League.

The Indian Premier League have always been a fair battle between bat and ball with bowlers and batsmen finding help of equal measure in most matches. Sometimes the bowlers have drifted away and have gone for plenty while on some occasions the batsmen have faltered and been dismissed for a cheap score. On days the bowlers have the final laugh, batsmen are often dismissed for ducks. There have been plenty of such instances in the IPL. Here we take a look at five batsmen with the most ducks in IPL history. IPL Controversies- Part 4: Pakistan Players' Participation Banned in 2009 After 26/11 Mumbai Attacks.

Most Ducks in IPL

The Turbanator is certainly a surprise name in this list. But he holds the record of most ducks scored by a cricketer in the IPL. Harbhajan, who will turn out for the Kolkata Knight Riders in IPL 2021, has been dismissed on a duck for 13 times 88 innings. The 40-year-old has played for Mumbai Indians and Chennai Super Kings in the IPL. But apart from the ducks, Bhajji also has scored one half-century in the tournament.

Former Rajasthan Royals captain and an IPL regular, Ajinkya Rahane also has 13 ducks to his name. Rahane, predominantly an opening batsman, has been dismissed on a duck 13 times in 140 innings. He now plays for Delhi Capitals and also has two centuries and 28 half-centuries to his name.

The Hitman is one of the most successful batsmen in the history of the Indian Premier League and is among the five highest run-scorers in the competition. Rohit though will not be proud of this record as he has 13 ducks to his name. Those have come in 195 innings. The 33-year-old has led Mumbai Indians to five IPL titles and is the most successful cricketer in the history of the tournament having won the title six times, first as a player with Deccan Chargers.

Piyush Chawla, who was signed by Mumbai Indians in the IPL 2021 players auction, has 12 ducks which is the fifth-highest in the tournament’s history. Chawla has been dismissed for a duck 12 times in 81 innings. He started his IPL career with Kings XI Punjab and has also played for Kolkata Knight Riders and Chennai Super Kings.

(The above story first appeared on LatestLY on Apr 07, 2021 04:52 PM IST. For more news and updates on politics, world, sports, entertainment and lifestyle, log on to our website latestly.com).