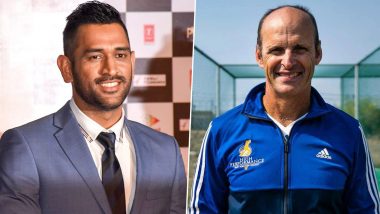 MS Dhoni’s cricket future has become sort of a trending topic as his absence from the game nears one-full year. One of India’s greatest captains and a greater cricketer, Dhoni has disappeared from cricket since India’s exit from ICC Cricket World Cup 2019 semis and the uncertainty wrapped over his return or retirement has only made fans anxious. #DhoniRetires was a top-trending hashtag on the internet once again throwing the fans into a pool of uncertainty and fear of never being able to watch their favourite cricket star light up the international scene again. MS Dhoni Can Play T20 World Cup Even Next Year, Don't Go by Social Media, Says Childhood Coach Keshav Banerjee.

But if there is one man, who could just correctly predict Dhoni’s future or read his mind it would former India coach and a World Cup-winning coach Gary Kirsten – a man Dhoni once described as the best thing to happen to Indian cricket. Kirsten in his capacity as the India coach spent four years with Dhoni and also guided India to a World Cup win in 2011 with Dhoni as the captain. The former South African captain feels whatever the outcome of his future is, Dhoni should be allowed to hang up his cricket boots on his own terms. MS Dhoni Lacked Intent During India vs England ICC Cricket World Cup 2019 Match, Claims Ben Stokes in his Book.

"MS (Dhoni) is an incredible cricketer. Intelligence, calmness, power, athleticism, speed, and a match-winner puts him amongst the greatest sportsmen in the modern era,” Kirsten told Times of India. "He (Dhoni) has earned the right to leave the game on his own terms and no one should dictate to him when that time is".

The 52-year-old, who was in the Indian dressing room when Dhoni smashed Nuwan Kulasekara for a towering six over mid-wicket to seal the World Cup at home still remembers that night very fondly. “It was a fantastic journey with the players and very fond memories of the World Cup,” he said recalling the good memories. “There were a lot of expectations from the players to win the World Cup and they handled it incredibly well.”

Meanwhile, Dhoni who has represented India in 350 ODIs, 90 Tests and 98 T20Is and scored over 17,000 international runs, has not played any form of cricket since India’s heart-breaking 18-run defeat to New Zealand in the World Cup semi-finals. He initially went on a two-month sabbatical break from cricket to train with his par-military regiment but has not made any comment on his future since then.

The 38-year-old was to make his cricket return in IPL 2020 with the Chennai Super Kings (CSK). But the franchise T20 tournament was indefinitely postponed by BCCI due to the coronavirus pandemic and the nationwide lockdown. Dhoni, as said by Suresh Raina and few other CSK teammates, looked in fine touch during the CSK preparatory camp in Chennai.

(The above story first appeared on LatestLY on May 29, 2020 09:43 AM IST. For more news and updates on politics, world, sports, entertainment and lifestyle, log on to our website latestly.com).