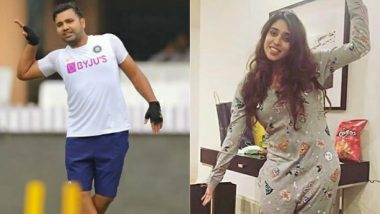 With Indian Premier League (IPL) 2020 set to go underway on September 19 in UAE, all the cricketers must be preparing for the tournament and Mumbai Indians captain Rohit Sharma is no exception. Along with gearing up for the season, however, the swashbuckling opener is also spending a gala family time at home and his latest Instagram post is the proof of the fact. The Hitman shared a merged picture in which he and his wife Ritika Sajdeh can be seen posing in a certain way. “Just two weirdos in love,” the talismanic batsman captioned the picture. Rohit Sharma Wants Sachin Tendulkar & Shaun Pollock Back Ahead of IPL 2020.

Well, the post was nothing but cute as the comment section was filled with love. This was, however, not the first time when the MI skipper gave his fans couple goals. The 33-year-old has been quite active on social media lately and is often sharing adorable pictures and videos not just with Ritika but with his adorable daughter Samaira too. Meanwhile, let’s look at his latest post. Rohit Sharma Shares Super-Cute Picture of Daughter Samaira Wearing Sunglasses.

Coming to cricket action, defending champions Mumbai Indians will fight for their fifth title in the upcoming season. Well, Rohit Sharma’s Men might step into the tournament as the most successful IPL team. However, they still have to break the jinx of not winning the title in even years.

In fact, jokes and memes based on this record are also doing rounds of social media. However, Rohit will want to end this streak by clinching the trophy this time too. With the presence of Hardik Pandya, Jasprit Bumrah and Rohit himself, MI already was one of the strongest teams. However, the addition of Chris Lynn and Trent Boult have strengthened their team even more. So, cricket fans must brace themselves as Mumbai Indians are determined to defend their title.

(The above story first appeared on LatestLY on Aug 06, 2020 06:34 PM IST. For more news and updates on politics, world, sports, entertainment and lifestyle, log on to our website latestly.com).